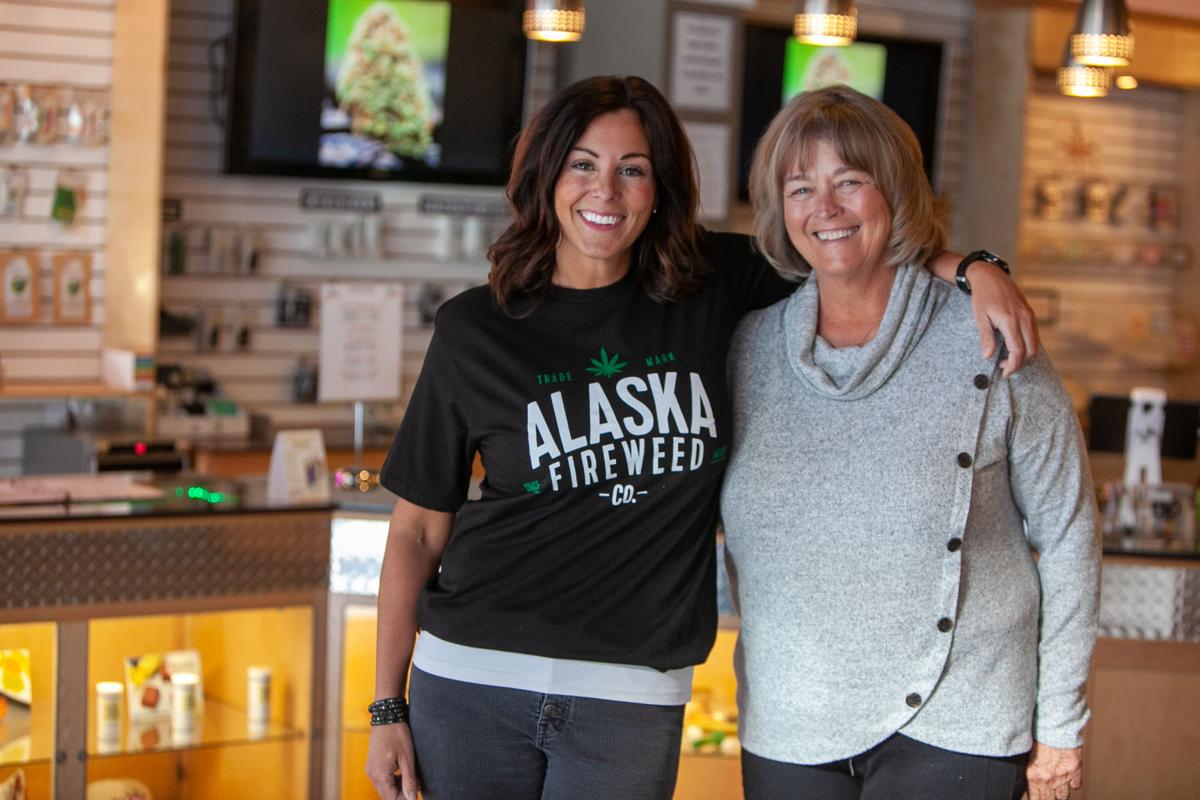 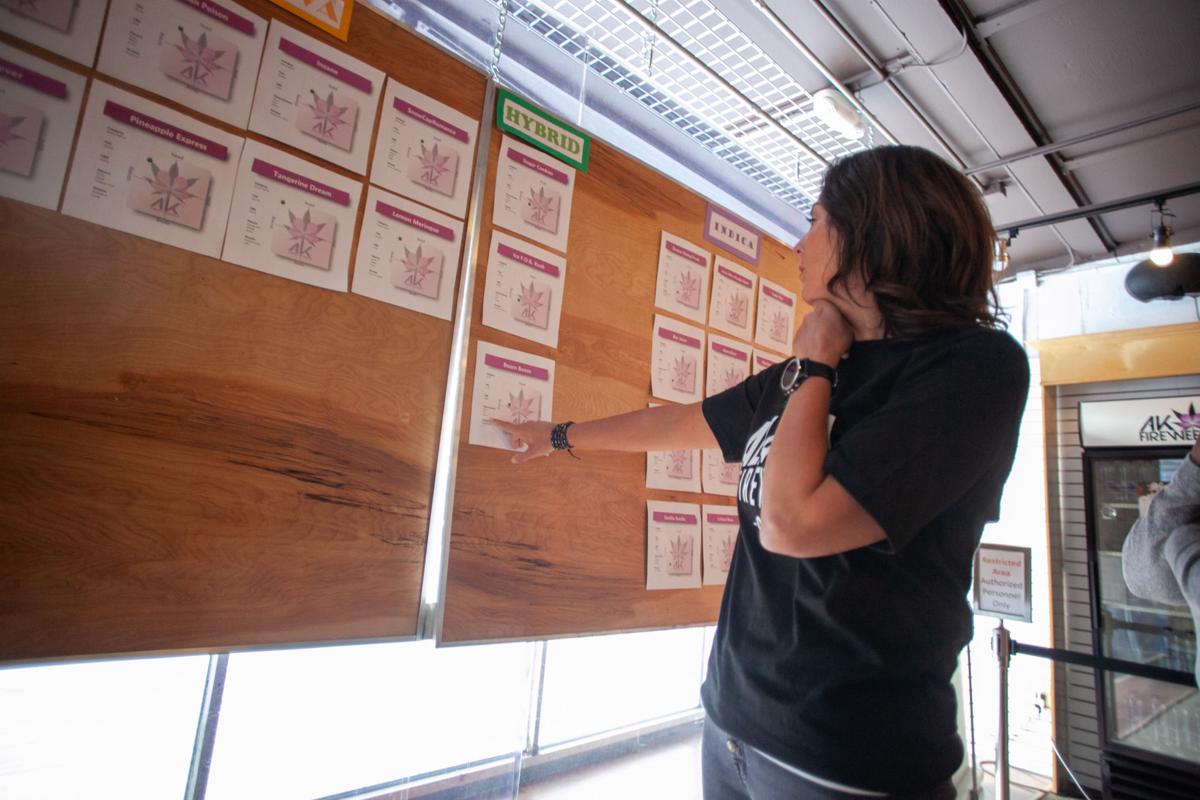 Marci Cartier points out the strain chart that their buyer set up to give customers a no-pressure look at the different strains for sale on March 2, 2020. (Photo by Matt Buxton) 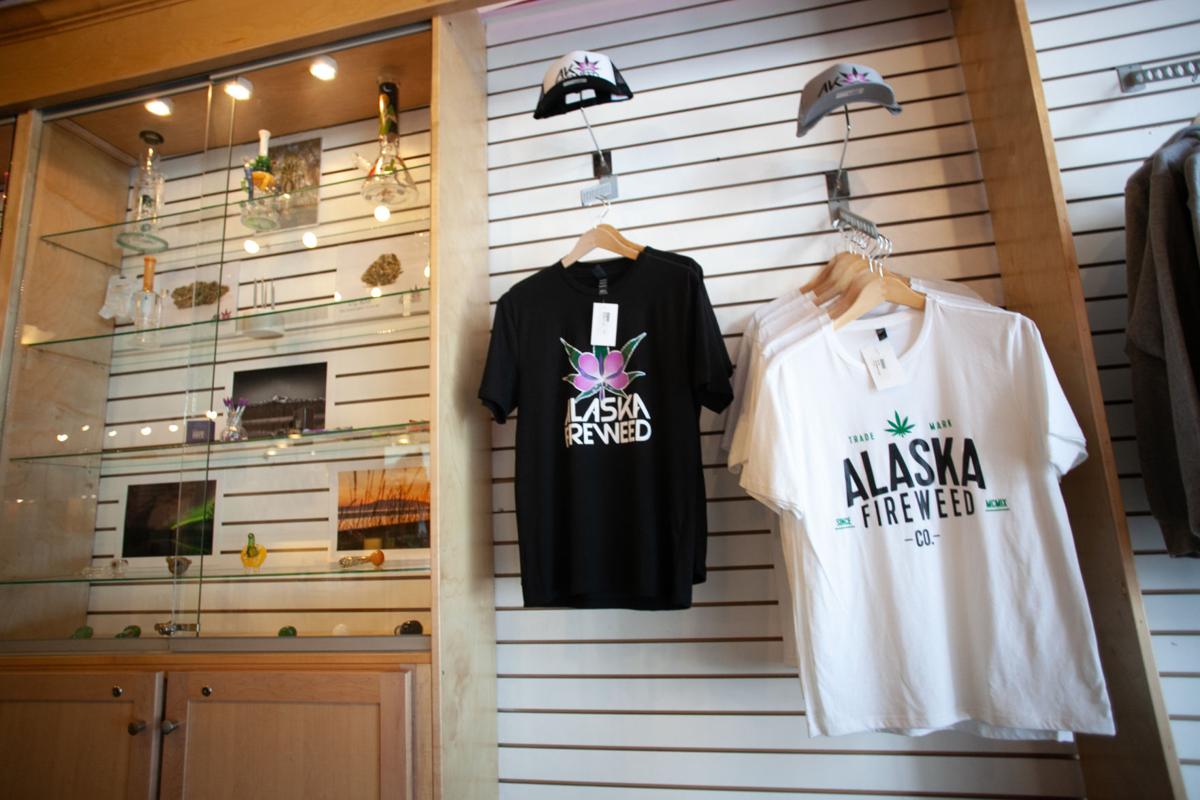 AK Fireweed has a wide selection of apparel and gear. 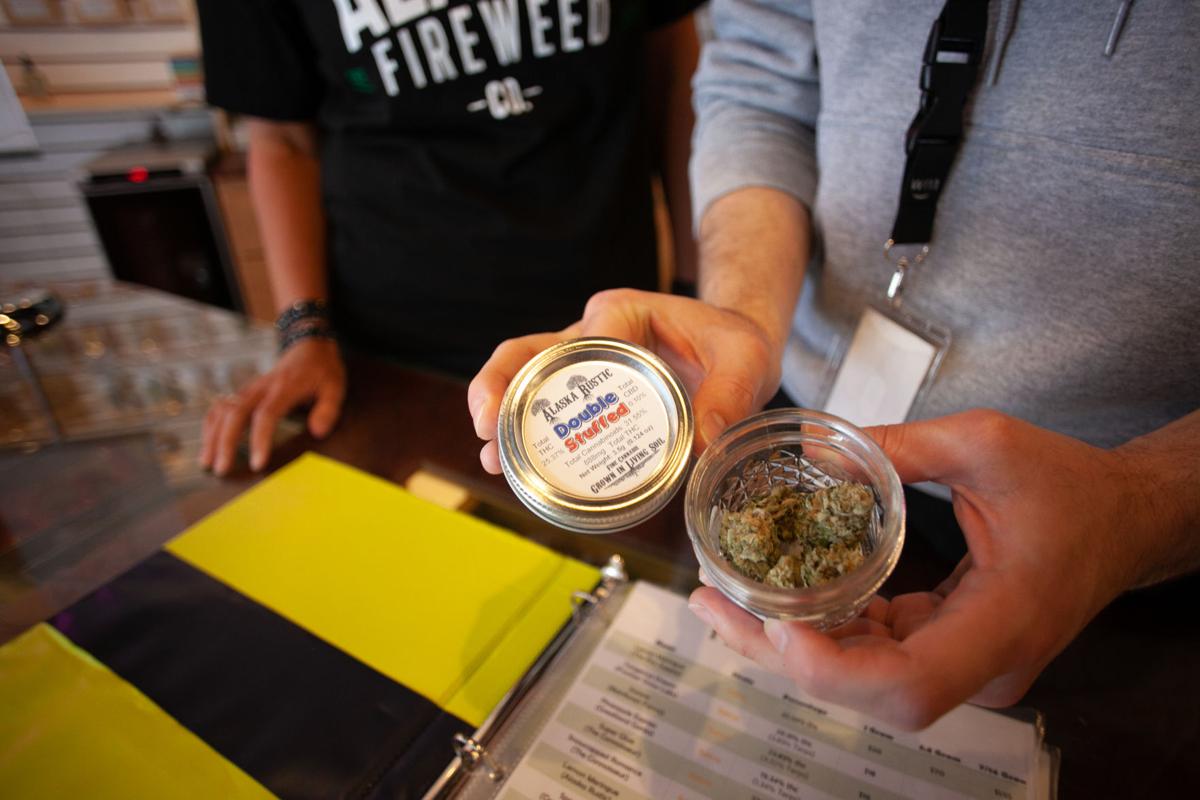 AK Fireweed seeks out strains from small and boutique growers like Double Stuffed from Alaska Rustic. (Photo by Matt Buxton) 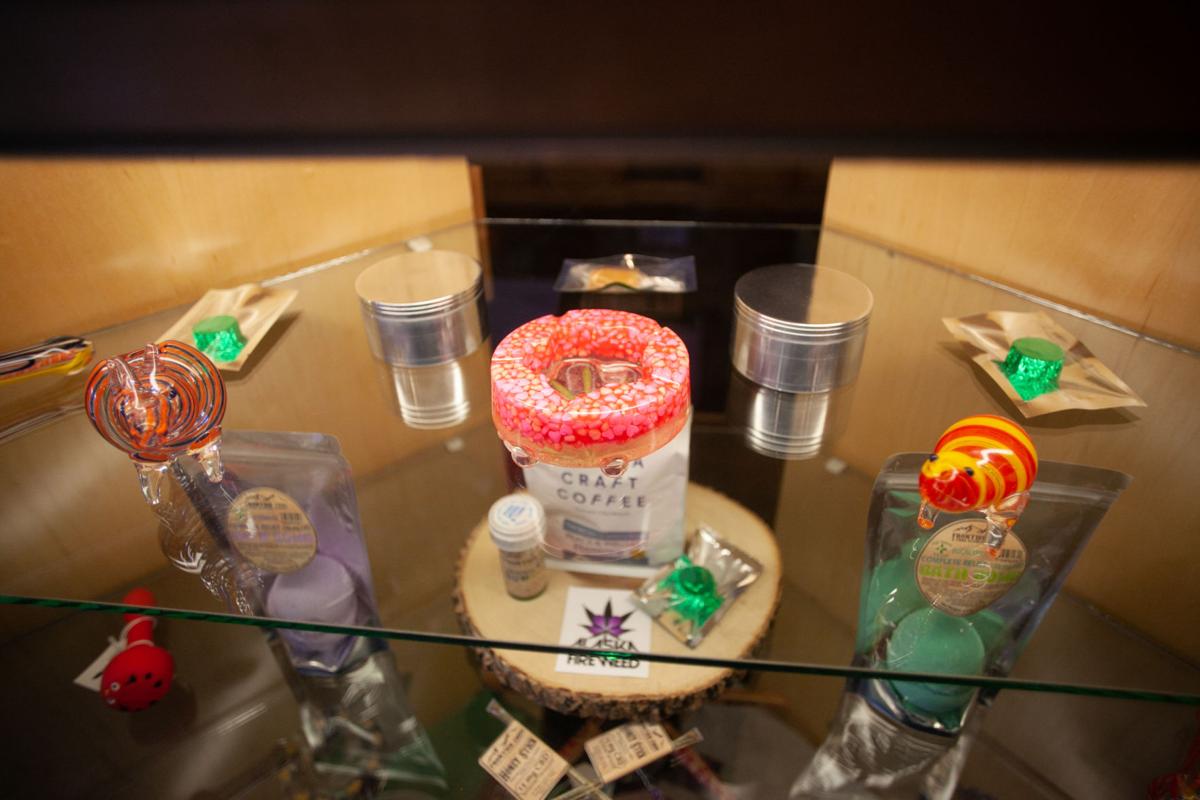 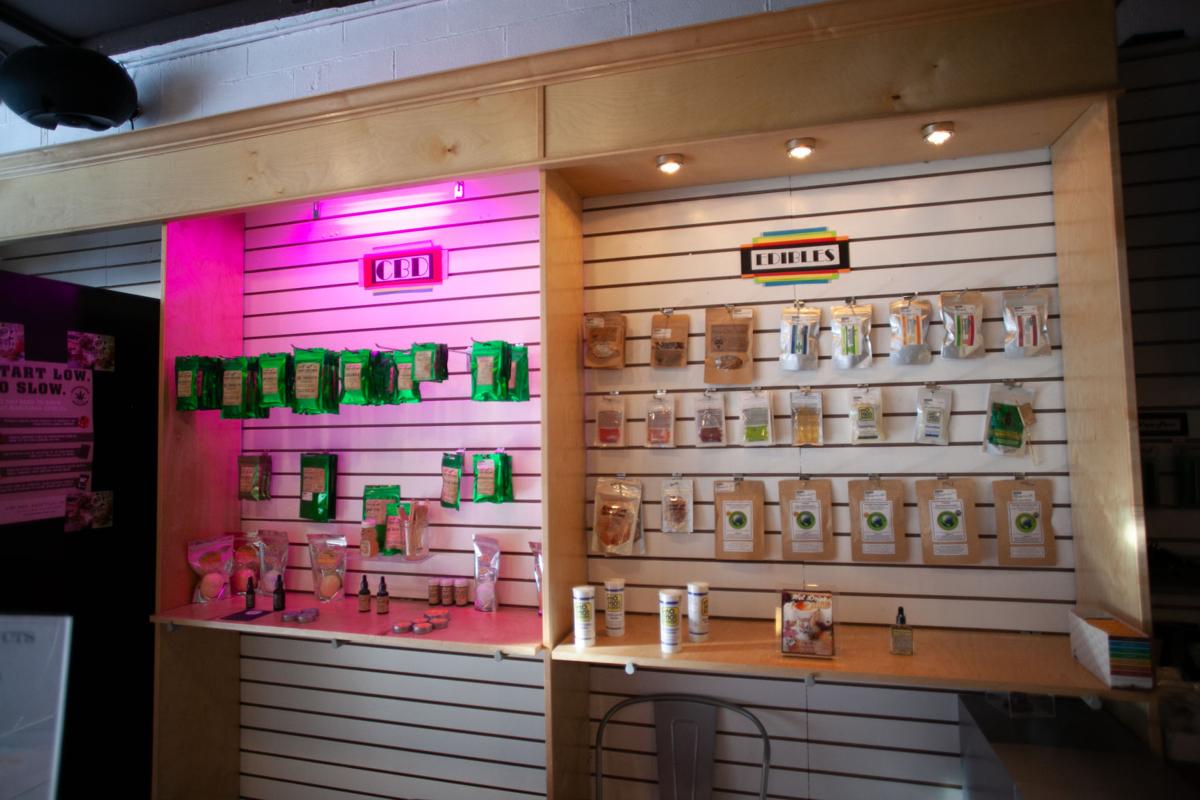 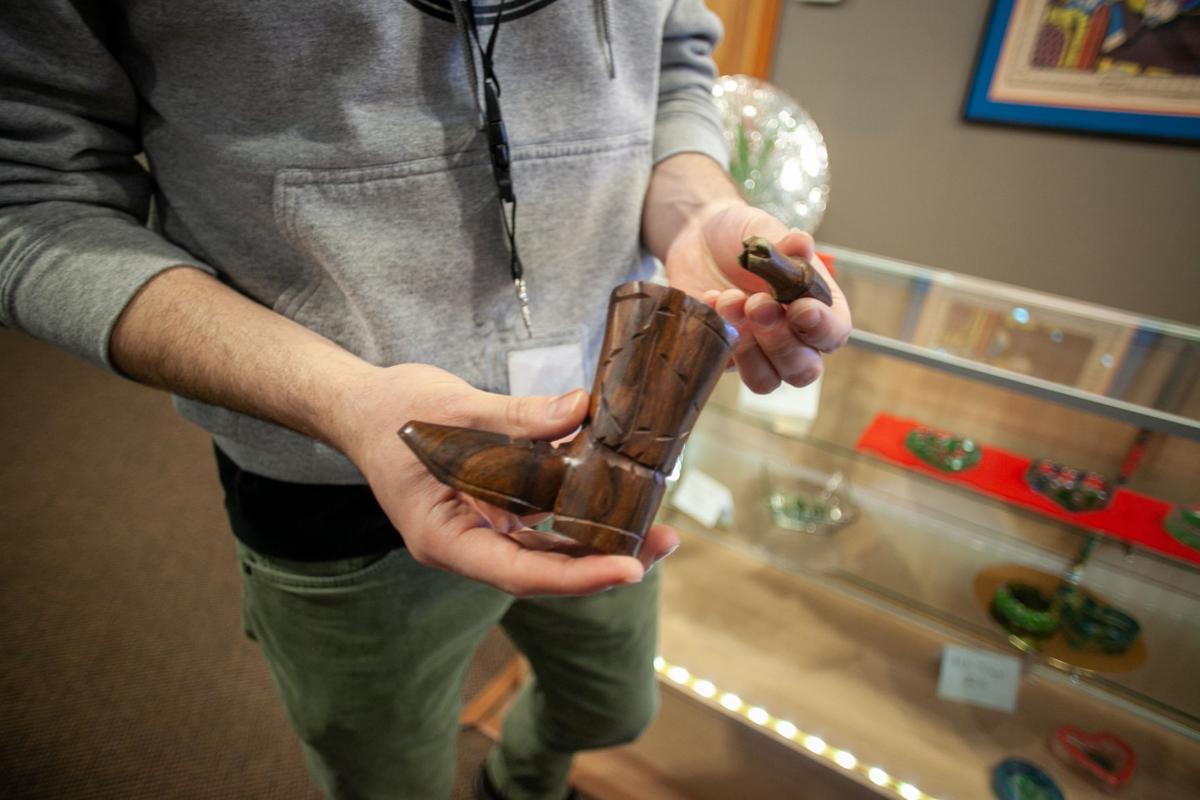 AK Fireweed also has several items that tie back to its early days, like a cowboy boot grinder from one of the company's early mentors. 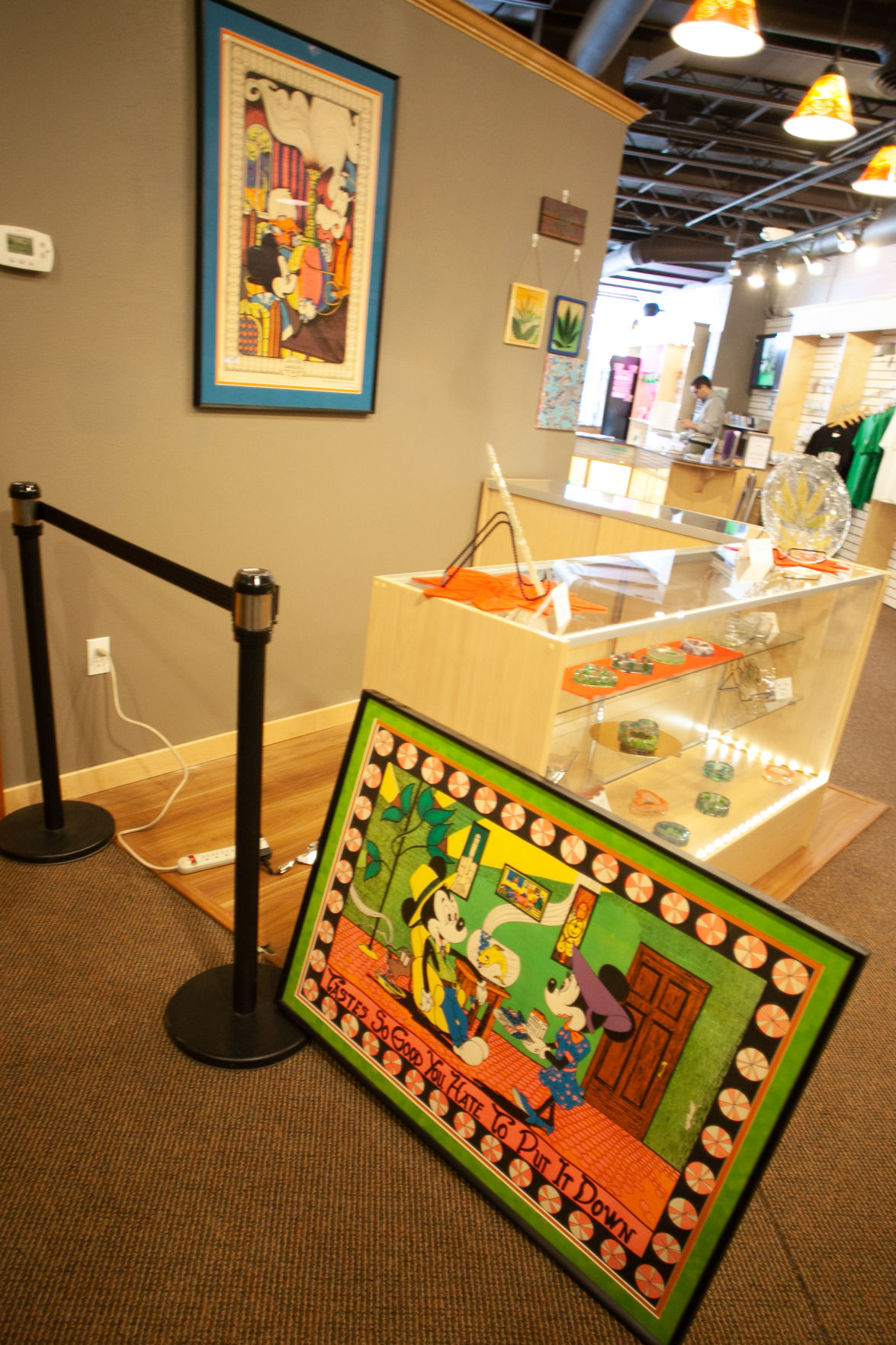 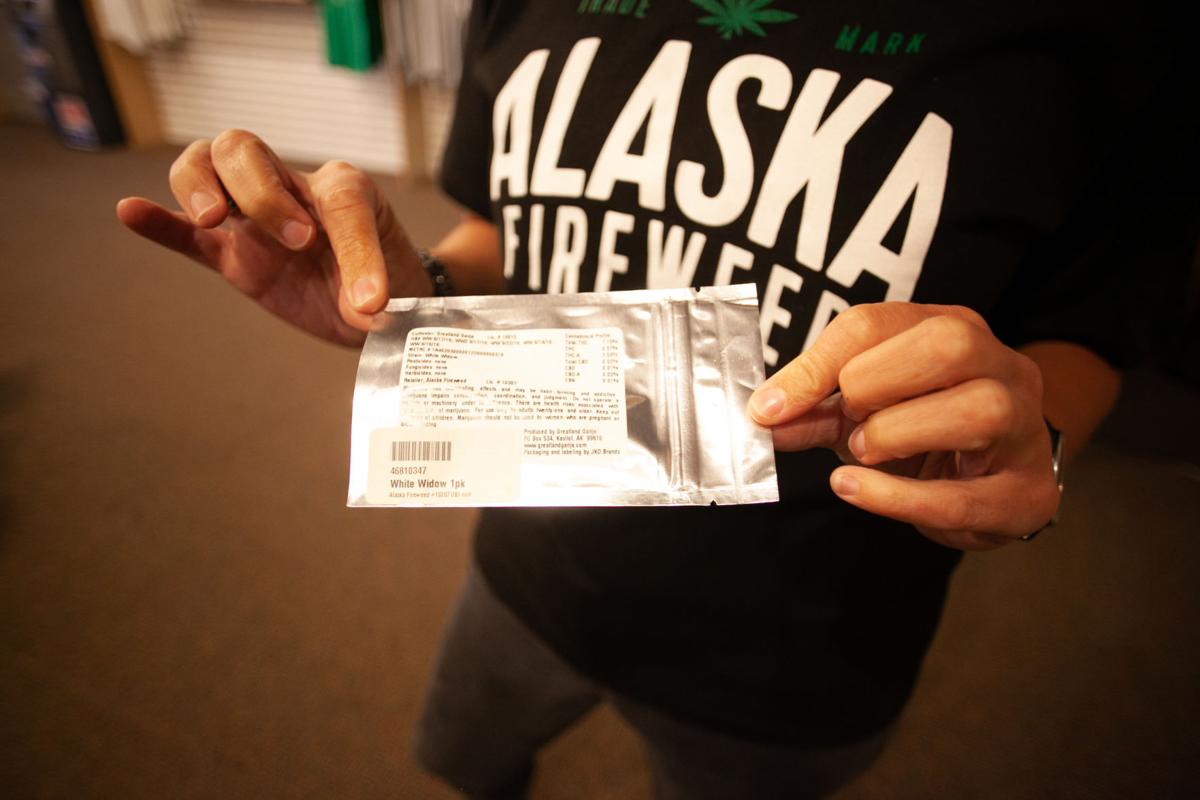 Marci Cartier shows off the first joint ever sold at AK Fireweed, joking about how the 7% THC content was a hot seller in the early days. Now, she says customers are seeking out THC content crossing the 30% mark.

Marci Cartier points out the strain chart that their buyer set up to give customers a no-pressure look at the different strains for sale on March 2, 2020. (Photo by Matt Buxton)

AK Fireweed has a wide selection of apparel and gear.

AK Fireweed seeks out strains from small and boutique growers like Double Stuffed from Alaska Rustic. (Photo by Matt Buxton)

AK Fireweed also has several items that tie back to its early days, like a cowboy boot grinder from one of the company's early mentors.

Marci Cartier shows off the first joint ever sold at AK Fireweed, joking about how the 7% THC content was a hot seller in the early days. Now, she says customers are seeking out THC content crossing the 30% mark.

If you think a career in nursing might not be a great way to prepare for running a cannabis retail shop, then you haven’t met Sue Nowland, owner of Alaska Fireweed and Denali Grass Co.

With more than two decades as a nurse, 15 years in medical sales and a resume that includes things like helping found the state’s first air ambulance program in the ‘70s and as an emergency responder, Nowland said taking a risk is in her nature.

“I was up in Nome working on a project and doing some gold mining on the side when 2014 came around and cannabis legalization was on the ballot. I had a friend who was a horticulturist out of Humboldt County, but I didn’t really know what that meant,” she said with a laugh. “So, I had some influence to know where the industry was going.”

She said she knew that opportunity would come with risks, but help of her “horticulturist” friend and another connection to the Washington market helped her to be prepared.

“Jumping into the ocean was something I’m not afraid of,” she said. “I sailed from the mainland to Hawaii on a 34-foot boat, worked medevacs in the ‘70s and ‘80s and dredged gold in the Bering Sea, so risk taking is probably in my nature.”

So, when she opened Alaska Fireweed in 2016 on Downtown Anchorage’s Fourth Avenue, a tourist-heavy road that now is home to a handful of other cannabis storefronts, she knew that supply would be a major hurdle. Alaska Fireweed is solely retail and today focuses on bringing in smaller, boutique growers, but in those early days she tried to buy up whatever was out there.

“I think the mentorships I had gave me the guts to get into the business,” she said.

She and her daughter, Marci Cartier, laugh about how the first joint they sold — it also happened to be the first joint sold legally in the city — had less than 10% THC content. Today, customers are looking for strains in the high 20s or even 30s of THC content while some aficionados are now looking for ideal terpene profiles.

Consumer taste has also evolved, so Alaska Fireweed has a prominent display of edibles and CBD-infused products. Nowland said she grew up with little first-hand knowledge of marijuana — working in the health care industry also came with drug testing — but that working in retail has opened her eyes to its benefits.

Alaska Fireweed has a helpful display put together by the company’s buyer, Steve Edwards, that breaks down the effects a user might expect from each strain, highlighting whether they’re a head high or a body high and the intensity of the high. It creates a low-pressure way for customers to check out different strains.

“I think educating people is three-quarters of the fun in this industry and being able to talk intelligently. People want to know about cannabis and CBD and they are interested in organic farming, differences between BHO, CO2 and EHOH vapes as well as how an edible is metabolized in our body,” Nowland said.

That attitude was critical when she and Cartier looked at expanding into Healy last fall, a community that didn’t have a cannabis store and was skeptical about allowing one in.

Nowland and Cartier spent much of 2019 driving between Anchorage and Healy for community meetings to work out the plan for the business, which is located on property owned by 49th State Brewing Company.

“We worked about eight months with the Denali Borough to be there and answer questions and educate them about who we are and what we wanted to do. We were very transparent with the community,” Nowland said. “We weren’t locals, so it took some time to develop those relationships.”

Denali Grass Co. has a very low-key exterior with a simple sign that reads “Grass Co.” There aren’t any marijuana leaves or anything else that would suggest it’s a marijuana shop.

The work has paid off.

After last Halloween, the community gathered hundreds of pumpkins and jack-o-lanterns and left them out front in a tradition that welcomes or honors businesses or community members. The year before, it happened to the Three Bears grocery store.

Healy has a large summertime population with visitors and employees from the tourism industry, but it shrinks during the winter. They had planned for the sales to slow, but that hasn’t been the case.

“It was nice to be welcomed in the community,” Cartier said about Denali Grass Co. “We did not plan on being open in the winter, but the community supported us and we were also able to provide local employment during the winter months.”

That sense of belonging has definitely been true in Downtown Anchorage, where Nowland said attitudes have greatly shifted since the first cannabis sale in 2016. They host First Friday events with live music, give local artists a place to sell their art and are heavily involved in the Anchorage Downtown Partnership and its activities.

“It’s really important for the industry to be involved in their communities,” Nowland said. “I think you can look around Anchorage and see older buildings that have been brought up to date by cannabis businesses. … People first thought that cannabis would bring the community down, but I think our industry has enhanced and brought depth to the communities.”

She also laughs that across the street from Alaska Fireweed is the Anchorage Police Department’s headquarters.

“We say we’re a pot shop a pot shot away from the cop shop,” she said.

Still, the industry has brought its challenges, like dealing with the shifting regulatory structure that has caused plenty of headaches. But Nowland said she doesn’t want to dwell on the fights of the past but on the new opportunities ahead, like the possibility of onsite marijuana consumption that will be on the Anchorage local election ballot April 7. She’s also interested in seeing updates to the state’s marijuana tax laws, particularly when it comes to penalties for people who’ve avoided paying them.

Nowland and Cartier say they want to see a healthy and functioning marijuana industry and have sought to put their experience with the retail side of things to good use in helping others.

“I’ve made every mistake there is to make,” Nowland said. “The key is to just catch them quickly and be fluid. You really can’t be static, you need to be dynamic, and I think my experience and background has helped me change easily and not get stuck because there’s no books on the industry yet.”

“We could write one,” Cartier added.

“Well, we’ve got the don’ts down, but we don’t quite have the do’s yet,” Nowland laughed.

Nowland said one thing she can be sure about is the importance of having good employees who help build friendly relationships with consumers and cultivators.

“Our employees are our biggest resource,” she said. “They are what makes our industry, and I will never stop touting that. They are the backbone.”

One of those employees is her daughter, Cartier, which came as a surprise.

“I had no intention of bringing family in,” Nowland said, but she eventually needed a trusted second hand as the business took off.

They joke that at family gatherings they’ve had trouble explaining that they work together in the marijuana business, so when asked they say: “We help people and sell smiles.”