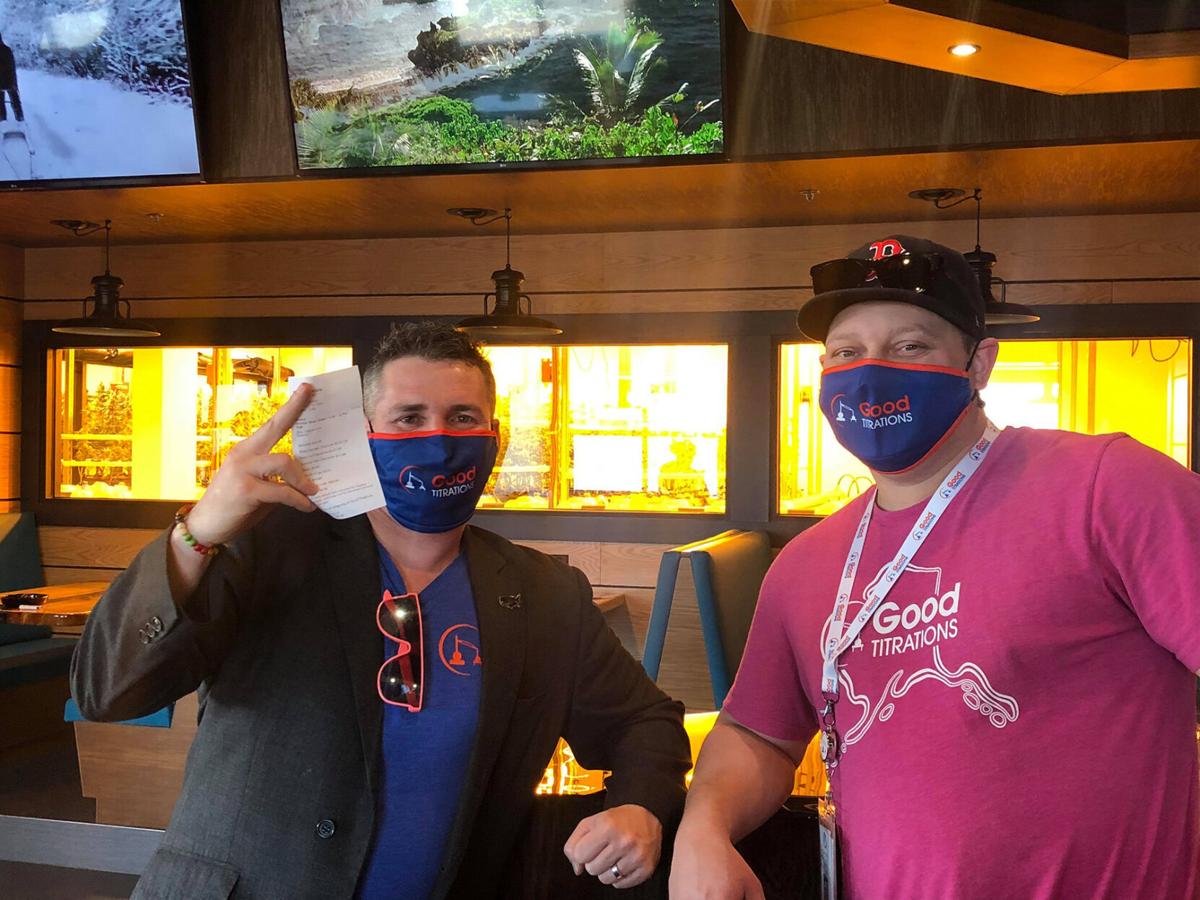 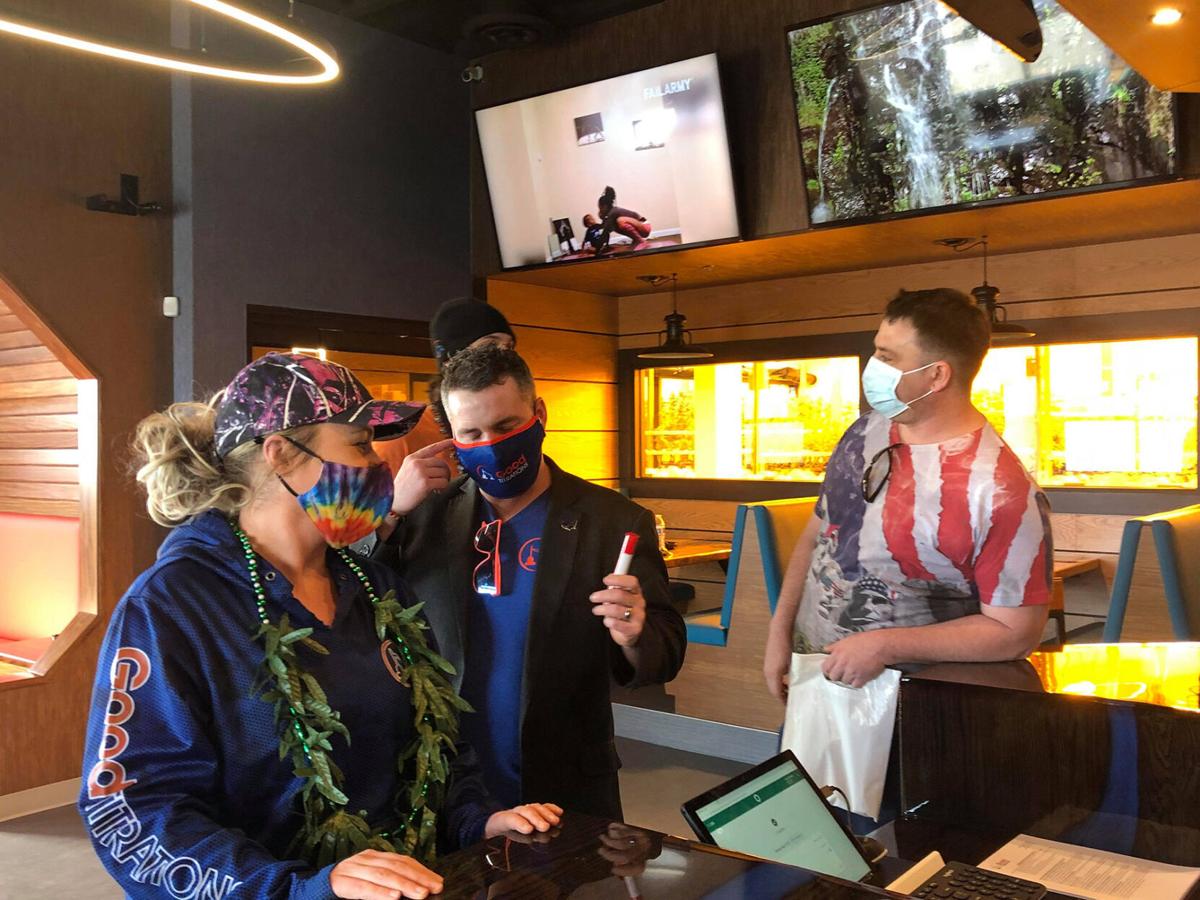 Good Titrations co-owner Brandon Emmett, center, holds the specially marked joint tube after he bought it in the onsite consumption lounge. At left is his wife, Allison Emmett. Frank Berardi is at right. Below, a customer opted to go for a 10 mg bottle from Tundra Brewing, mixed with a Sprite. Jessica Kerr photos 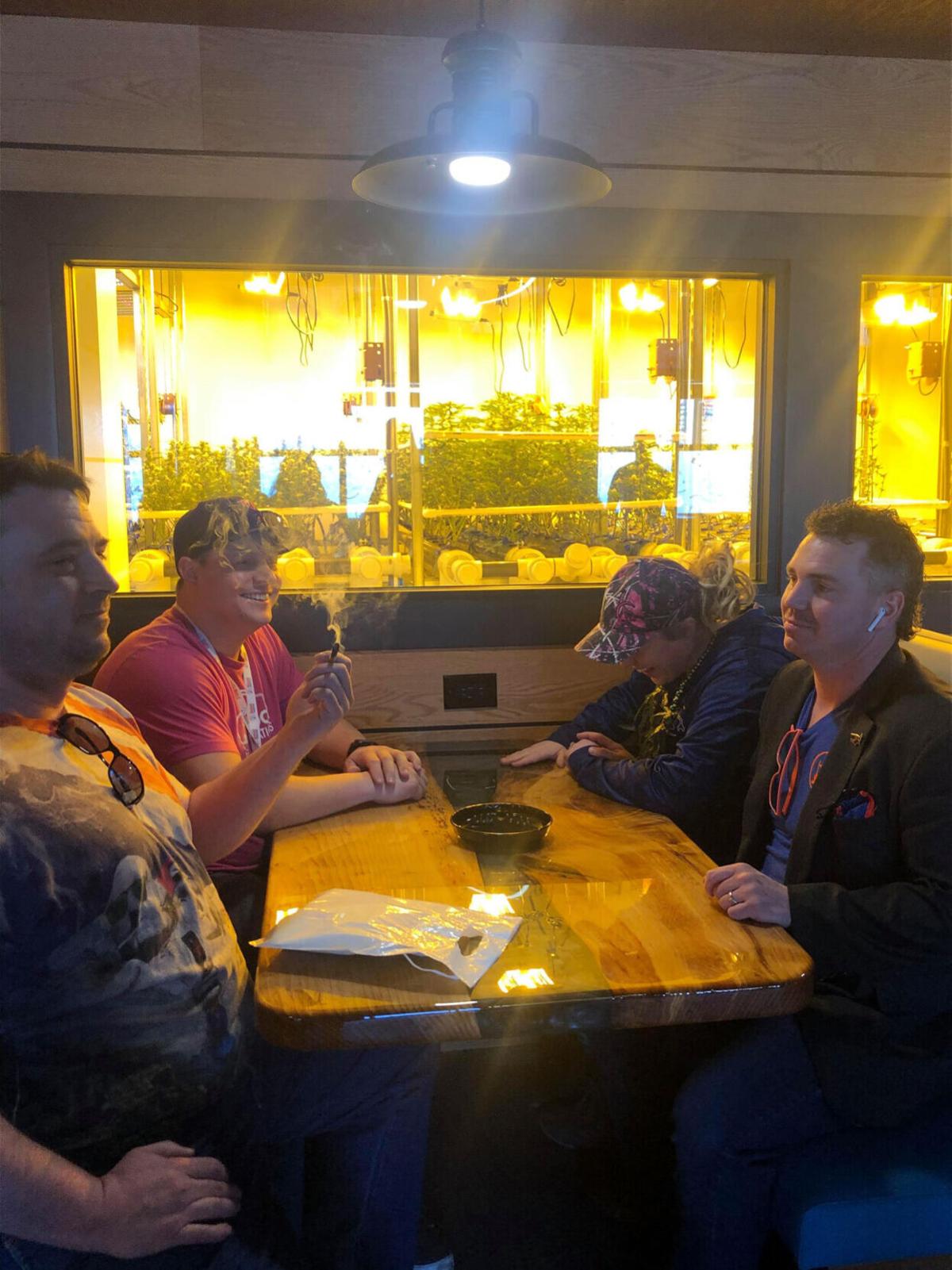 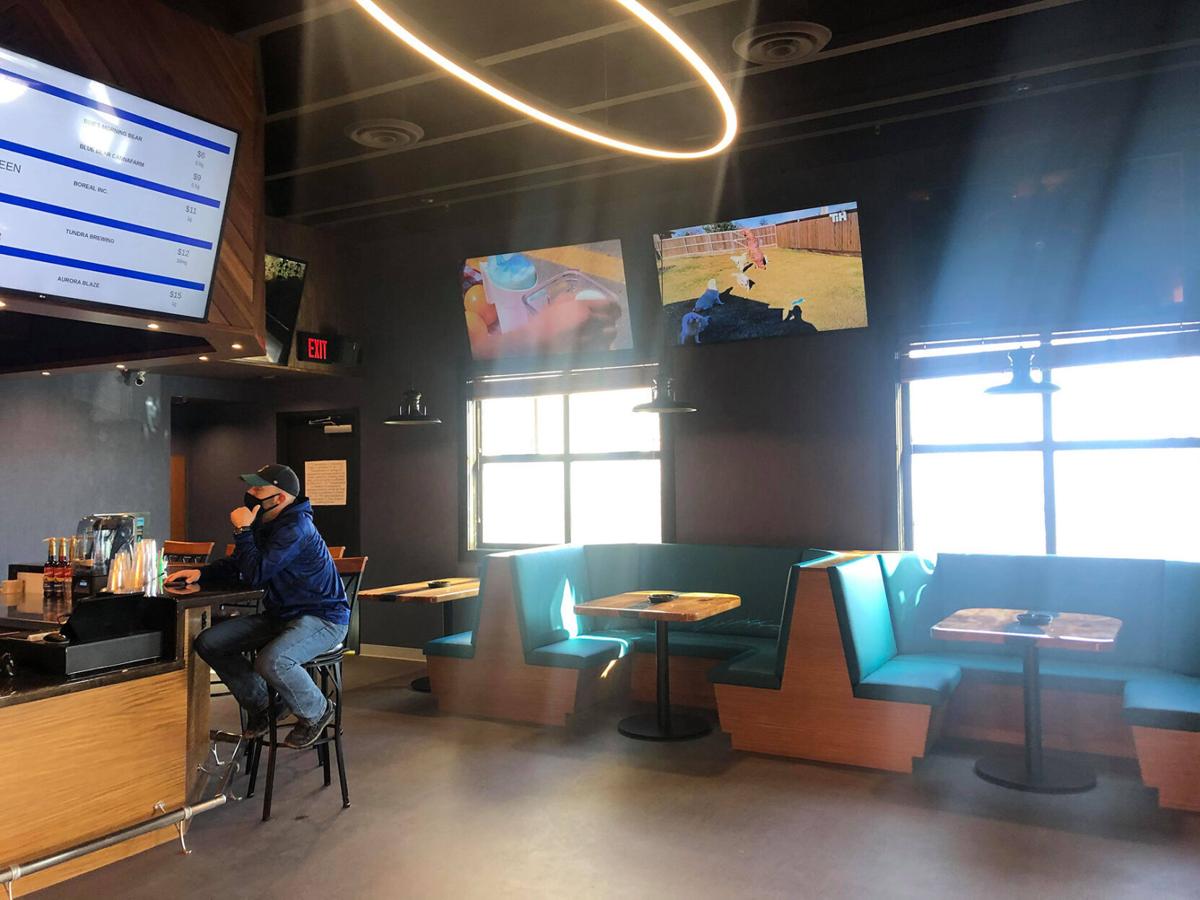 The onsite consumption lounge at Good Titrations just before it opened to the public on April 20, 2021.  Jessica Kerr photo

Good Titrations co-owner Brandon Emmett, center, holds the specially marked joint tube after he bought it in the onsite consumption lounge. At left is his wife, Allison Emmett. Frank Berardi is at right. Below, a customer opted to go for a 10 mg bottle from Tundra Brewing, mixed with a Sprite. Jessica Kerr photos

The onsite consumption lounge at Good Titrations just before it opened to the public on April 20, 2021.  Jessica Kerr photo

At 4:20 p.m. on April 20, 2021, Brandon Emmett celebrated his 39th birthday by making Alaska cannabis history: He bought the first joint to smoke in the first legally sanctioned onsite consumption cafe at Good Titrations in Fairbanks. Emmett is a co-owner of the business.

The joint was a Martian Mean Green from Boreal Inc. and Emmett shared it with his business partner, Shaun Tacke, as they gathered with family friends to celebrate in the custom-designed space.

It was a happy occasion on cannabis’ biggest informal holiday. Joining them were Emmett’s wife, Allison Emmett, who was decked out in marijuana-themed leggings and a (fake) cannabis-leaf lei, Tacke’s cousin Rob Reed and several others.

They sat in one of the dark orange and blue booths next to a large window looking into the adjacent grow room. Televisions tuned to a variety of channels flickered in the corners while a wreath of smoke gathered above the table.

And, while the cafe itself, The Cheesehead Joint, which will have a menu of gourmet cheese-themed stoner comfort foods, isn’t open yet, Good Titrations is partnering with Marlo’s Bakery and offers a range of baked goods such as cinnamon rolls, croissants and muffins. Tacke said The Cheesehead Joint should be open in late May or early June.

The April 20 opening was a moment that was years in the making. The Alaska Marijuana Control Board approved the first two onsite consumption licences in January 2020 — Cannabis Corner in Ketchikan and GoodSinse in Fairbanks — but the Covid-19 pandemic put those plans on the back burner.

That put Good Titrations out in front. Tacke and Emmett have been renovating the former Chili’s Restaurant off the Johansen Expressway in Fairbanks for more than a year to turn it into a retail/manufacturing/cafe site. Opening the cafe in the restaurant’s former bar area was a milestone for the pair.

“We’ve had an uptick in sales,” Tacke said, “but we’re still waiting for the cafe to catch on pretty strongly.”

He attributes the slow buildup to lingering pandemic fears, as well as the fact that school is still in session and summertime tourists haven’t arrived yet. He’s expecting to see more out-of-towners by late May.

“From what I’ve heard from the tourism industry is that bookings for hotels and stuff are looking pretty good, even without cruise ships,” Tacke said. “They’re using other means to get here. I still expect tourism to be good this year, compared to last year.”

However, he noted, Friday and Saturday nights have been bustling.

He and Emmett have both said they are aware that lots of eyes are on them as the first onsite consumption business, so they want to make sure they have everything done right.

Good Titrations has a different set of rules for the cafe than for the retail space in the same building. Customers who want to hang out in the cafe must buy their joint or edibles in the cafe.

They are not allowed to bring in their own weed, or to buy products in the Good Titrations’ retail area. Cafe products are packaged in single-use containers — 1 gram of cannabis flower or no more than 10 mg of THC in edibles. The packages are also bright red.

“Everything that we have is in one-ounce packaging, a vibrant red package, so that we will be able to see it right away,” Tacke said. “If there’s not a bright red package, we know that they are considering something that they pulled from the retail side or they have gotten it outside of the store. The rules are clear. They can’t bring anything into that room, so we doublecheck with everybody.”

As it stands now, Tacke said customers must consume everything they buy or dispose of anything left over before they leave. It’s a gray area in the regulations and Tacke said he and Emmett are looking at their options.

They would like the AMCO board to adjust regulations on the packaging so that a customer who has consumed half a joint, for instance, could put the remainder back into an approved joint tube, which has the label already on it that meets legal requirements, cap it back up and leave it.

“We want to make that an option,” he said, adding that the current restriction may deter some people from coming in to the cafe. “We are intending to make that change sooner than later. I’m working with our legal team to craft a letter to (AMCO) director (Glen) Klinkhart.”

Julie Stricker is a staff writer for Alaska Cannabist.