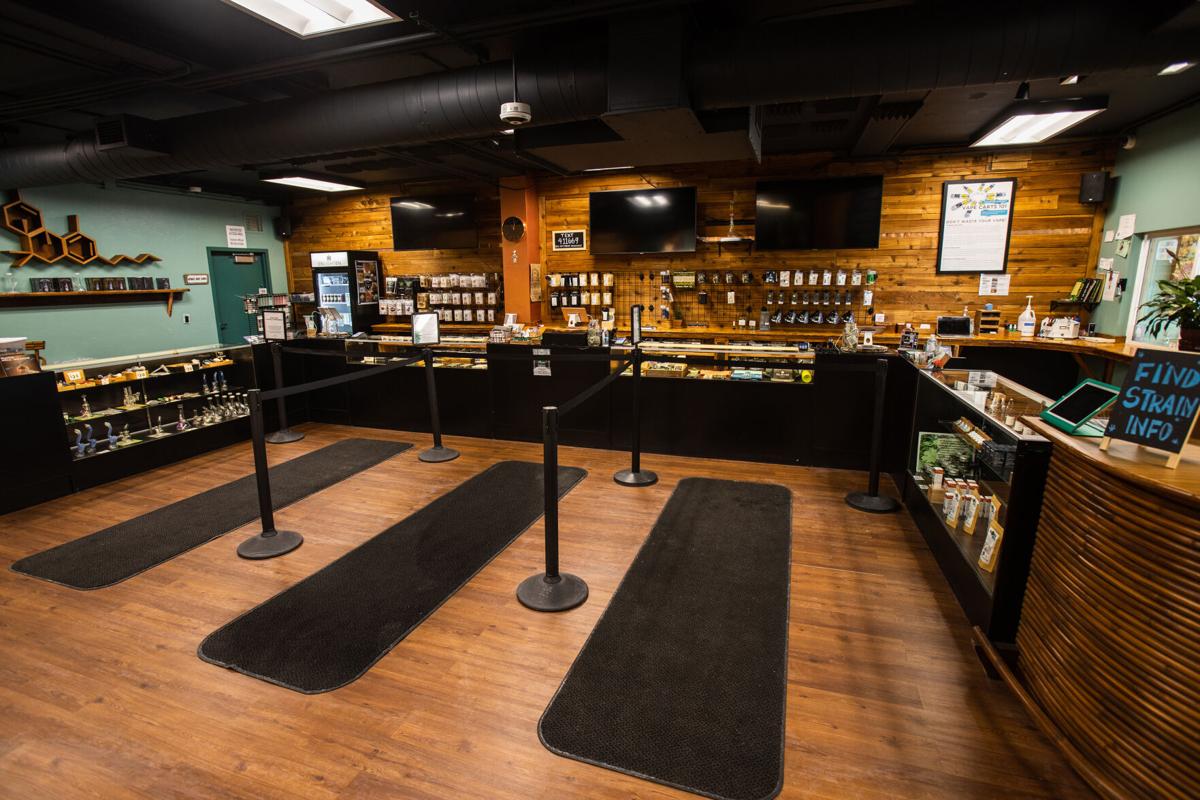 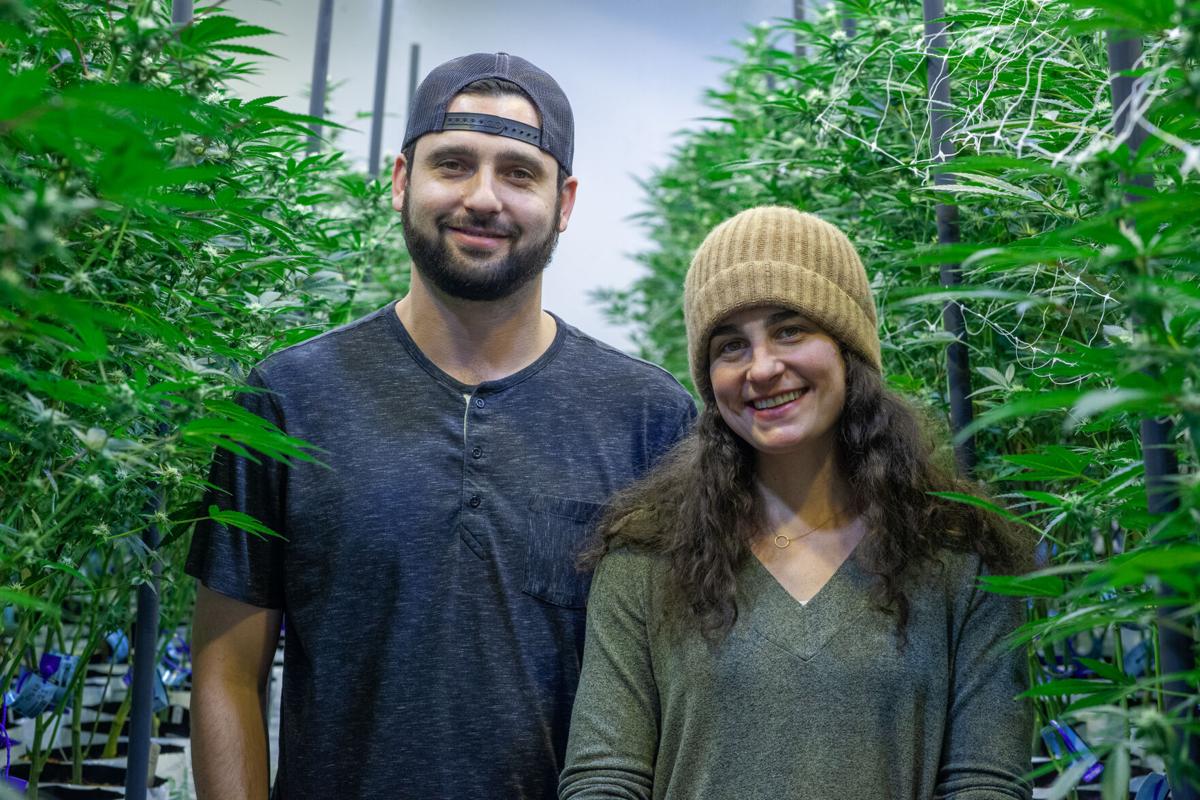 Siblings Evan and Leah Levinton, co-owners of Enlighten Alaska, stand among the flowering plants of what will be the company’s first harvest. After running a successful retail location in Anchorage for four years, the company is moving into growing and manufacturing. Matt Buxton photo 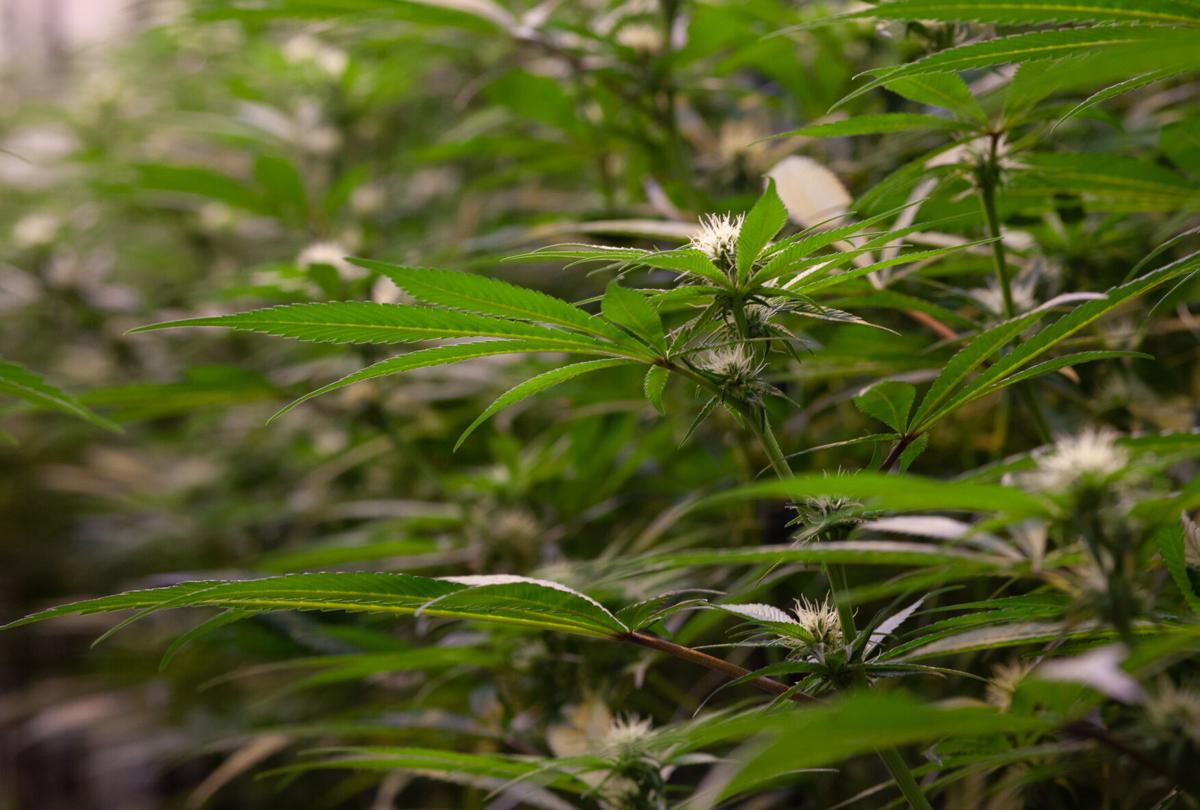 Enlighten Alaska is known as one of Anchorage’s top retail shops but its owners had originally wanted to get into growing. After four years in the business, they’re approaching the harvest of their first crop, which they hope to have out in time for April 20, 2021.  Matt Buxton photo 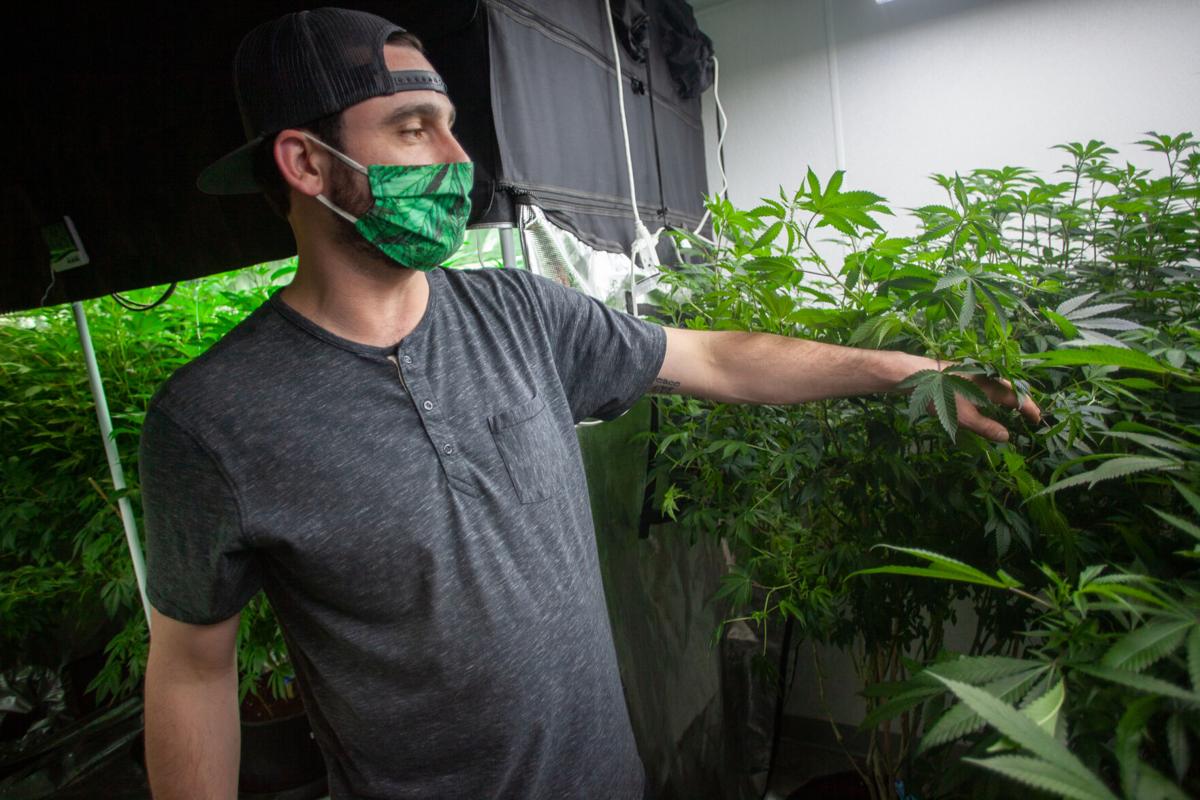 Above, Evan Levinton shows off some of Enlighten Alaska’s mothers at their new cultivation facility in Anchorage. Matt Buxton photo

Siblings Evan and Leah Levinton, co-owners of Enlighten Alaska, stand among the flowering plants of what will be the company’s first harvest. After running a successful retail location in Anchorage for four years, the company is moving into growing and manufacturing. Matt Buxton photo

Enlighten Alaska is known as one of Anchorage’s top retail shops but its owners had originally wanted to get into growing. After four years in the business, they’re approaching the harvest of their first crop, which they hope to have out in time for April 20, 2021.  Matt Buxton photo

Above, Evan Levinton shows off some of Enlighten Alaska’s mothers at their new cultivation facility in Anchorage. Matt Buxton photo

After four years in business, Anchorage’s Enlighten Alaska has established itself as a go-to cannabis retailer that helps anyone—from a gray-haired granny to the guy looking for the most potent product — find what they’re looking for and help them understand cannabis.

But retail wasn’t exactly what the family behind Enlighten Alaska had in mind when they opened their doors in Anchorage’s Spenard neighborhood on Feb. 2, 2017.

Siblings Leah and Evan Levinton and their mom, Jane Stinson, had wanted to get into cultivation before difficulty finding a suitable location sidelined the plan, but with a steady retail business under their feet they’re ready to take the plunge.

While there was still plenty of work to be done, on a February afternoon Leah and Evan Levinton gave the Alaska Cannabist a tour of a 15,000-square-foot warehouse they’ve been slowly converting over into a cultivation and manufacturing facility capable of growing and making just about any cannabis product imaginable.

The space has loads of potential with a commercial kitchen for edibles, which has already been put to use in manufacturing THC-infused capsules, lab space for extraction and concentrate manufacturing, and, of course, loads of space for growing flower.

“We’re trying to cover all the bases of what you’re able to make,” said Evan Levinton. “I don’t know what we won’t be able to make.”

They’ve already started selling Enlighten Caps and they have a target release date of April 20 for their first harvest of flower, which covers about 10 different strains.

“It’s pretty amazing and overwhelming to see how much work it is,” Evan Levinton laughed while walking through several spaces that were still in construction. “It still feels like a transition after growing outdoors for so long.”

A lot of the cultivation and retail business has been made possible thanks to their efforts to help the fledging industry get off its feet and navigate those early days of problems with everything from regulations to logistics.

“We thought we were actually late to the game when in fact we were one of the very first retail stores to open in Anchorage and statewide,” said Leah Levinton, recalling the early days. “We have since been building not only a strong team but a really stabilized business model where it’s all based on relationships and metrics. That’s kind of the Alaska way, building a business based on relationships.”

As an early entrant into the industry, Enlighten Alaska has had a strong focus on helping its employees and industry thrive.

Behind the scenes, they’ve helped connect Alaska’s retailers and growers to the rest of the state by offering up the retail store’s secure storage — which is a short drive from Anchorage Ted Stevens International Airport — as a place to store product while in transit from one location to another.

Hubbing has helped reduce the risk and travel time. It’s things like that, Leah Levinton says, that have helped the industry and Enlighten Alaska grow.

“It all started with talking to people, finding out where they were at, what they needed and seeing how we can work together,” Leah Levinton said. “Right in the very beginning we had this perspective. … I wanted to help people right from the beginning.”

That extends to Enlighten Alaska’s approach to retail, their employees and their customers. Leah Levinton said she believes it’s important for the budtenders and other employees to be familiar with the product and industry from top to bottom to ensure that they’re educated and helpful.

To that end, Enlighten Alaska encourages its employees to have a wide range of hands-on experiences with the industry and continually is looking at how they can improve and continue to grow.

One of those former budtenders is Jackson Ursin who has worked his way up to the retail store manager and is currently helping with the cultivation and manufacturing business.

“I think that fostering a collaborative workspace where we all work together on projects makes a difference,” he said. “I think that allows us to grow people and let them bloom and find their niche in cannabis. Allowing them to go down that rabbit hole and fully immerse themselves is really important.”

On any given day, you’ll find the team of friendly budtenders explaining everything from edible dosing and strain varieties to the most cutting-edge concentrates to a very diverse group of customers. Leah Levinton says she hopes that everyone can walk away happy and having learned something.

“We want to be known as the shop where everyone comes for cannabis knowledge,” she said. “That starts with every budtender having a certain level of knowledge, not just on our own product but about the cannabis world in general. … We want our brand to make an impact on the community.”

Matt Buxton is a freelance writer in Anchorage. Comments on this story? Email jstricker@AlaskaCannabist.com