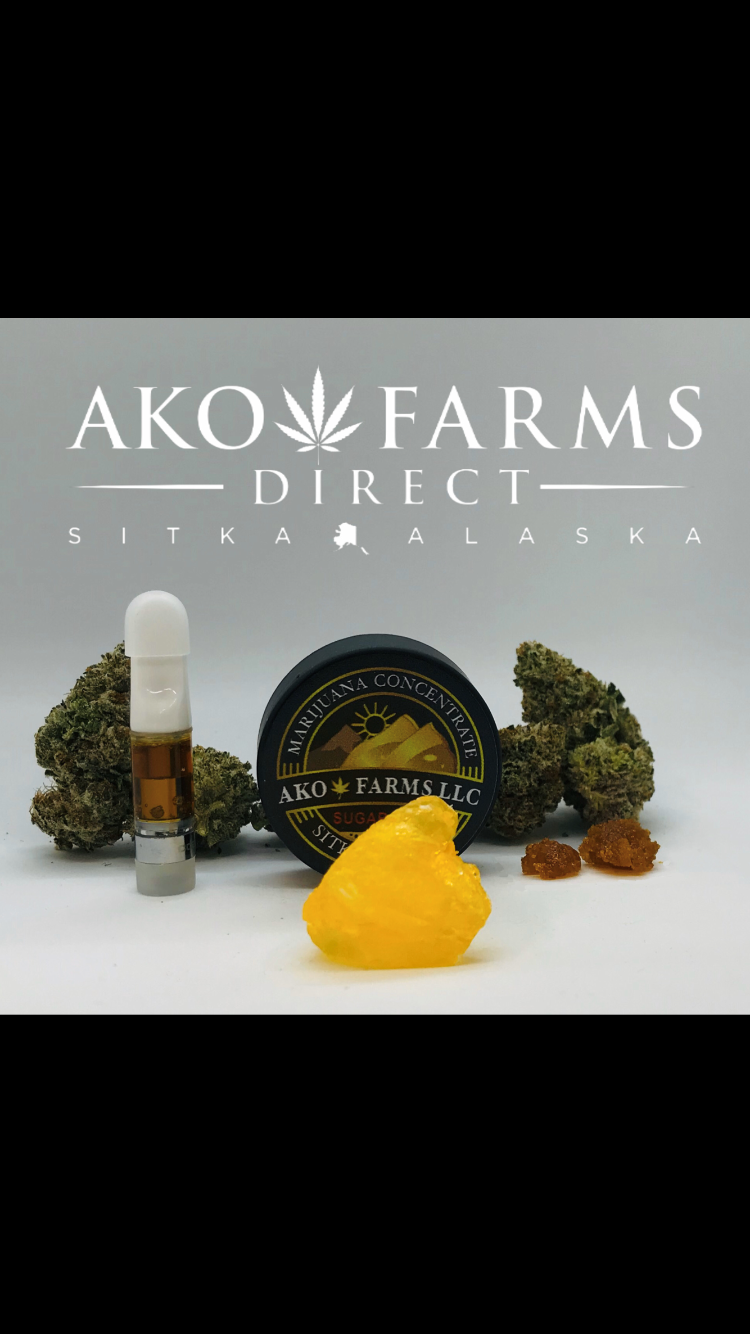 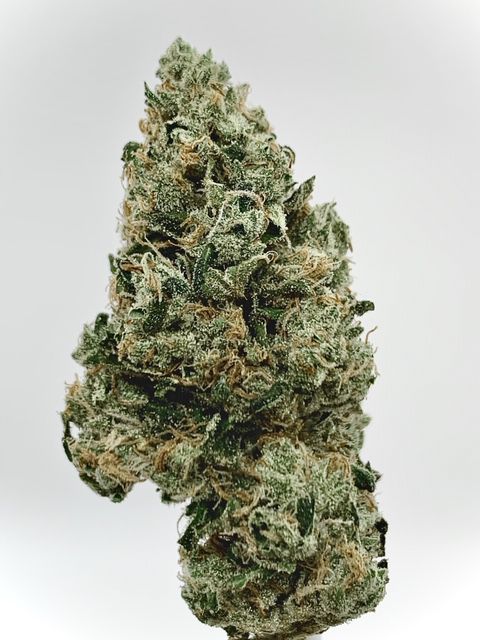 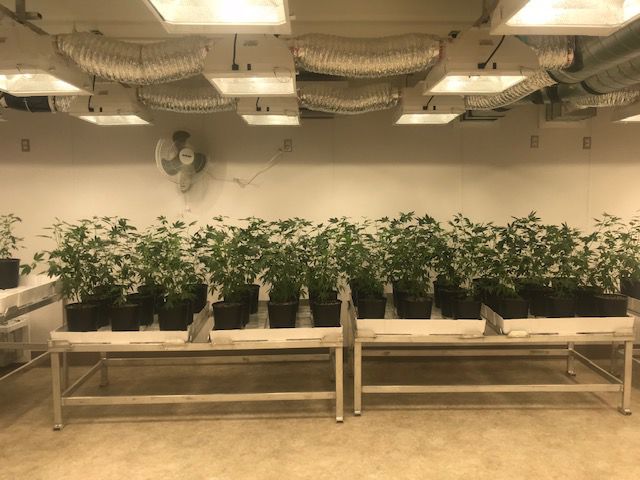 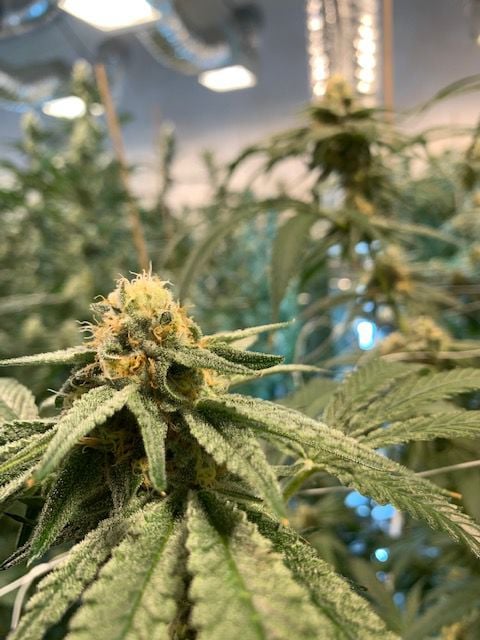 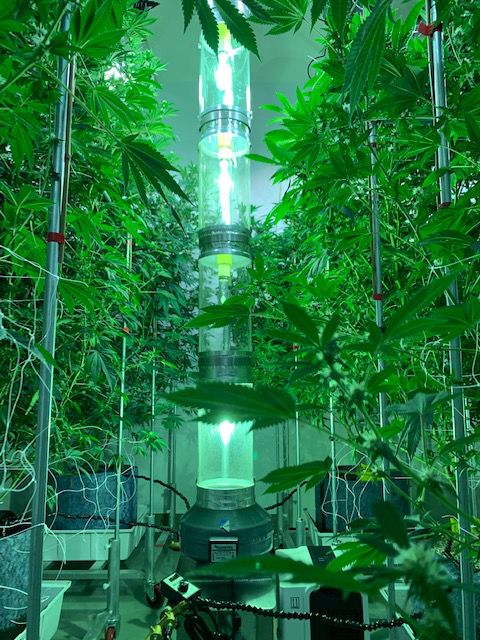 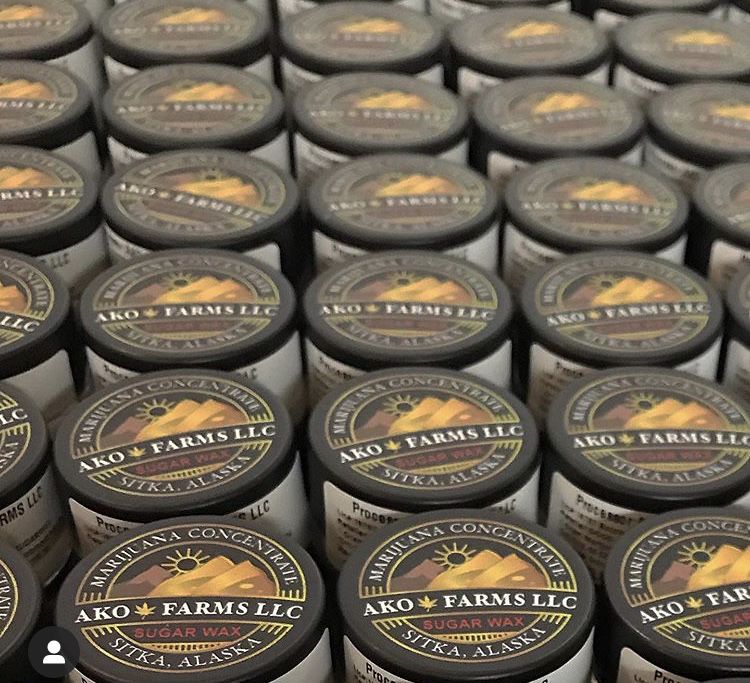 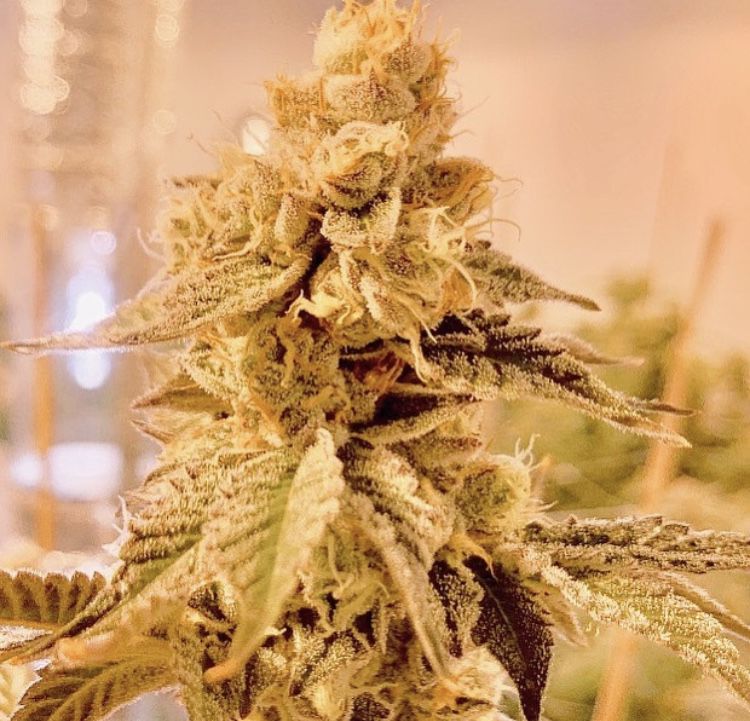 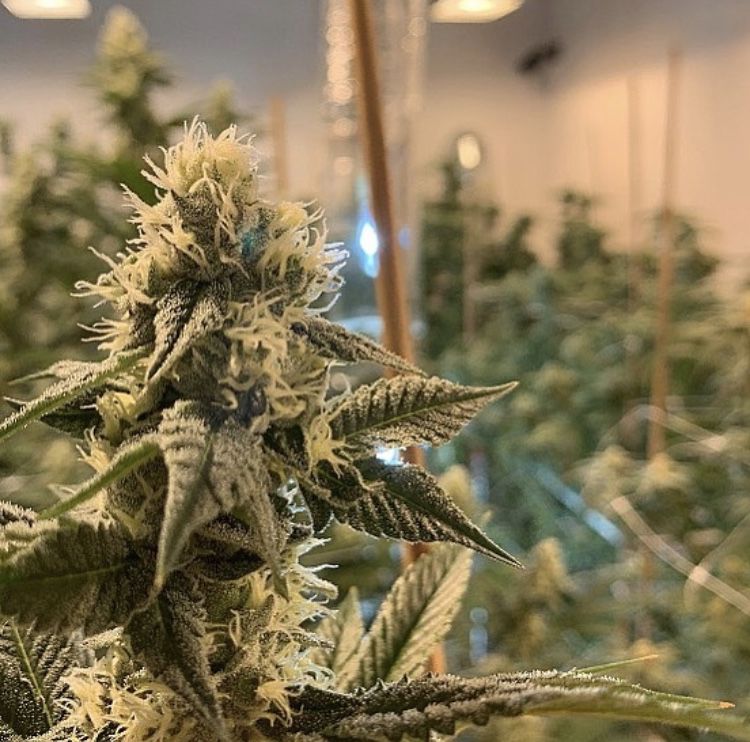 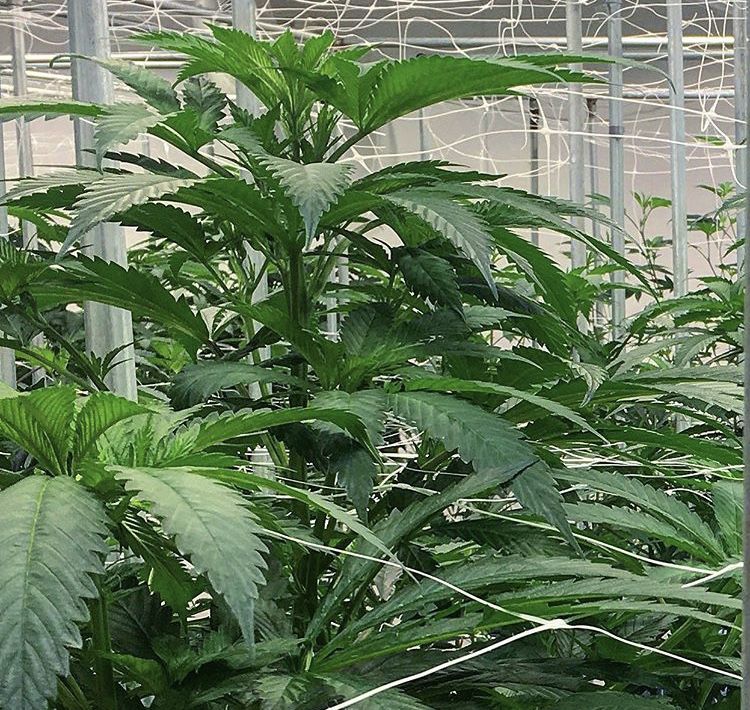 Tall plants grow through plastic mesh stretched across the room to provide structural support for plants as they grow. Photo courtesy of AKO Farms LLC. 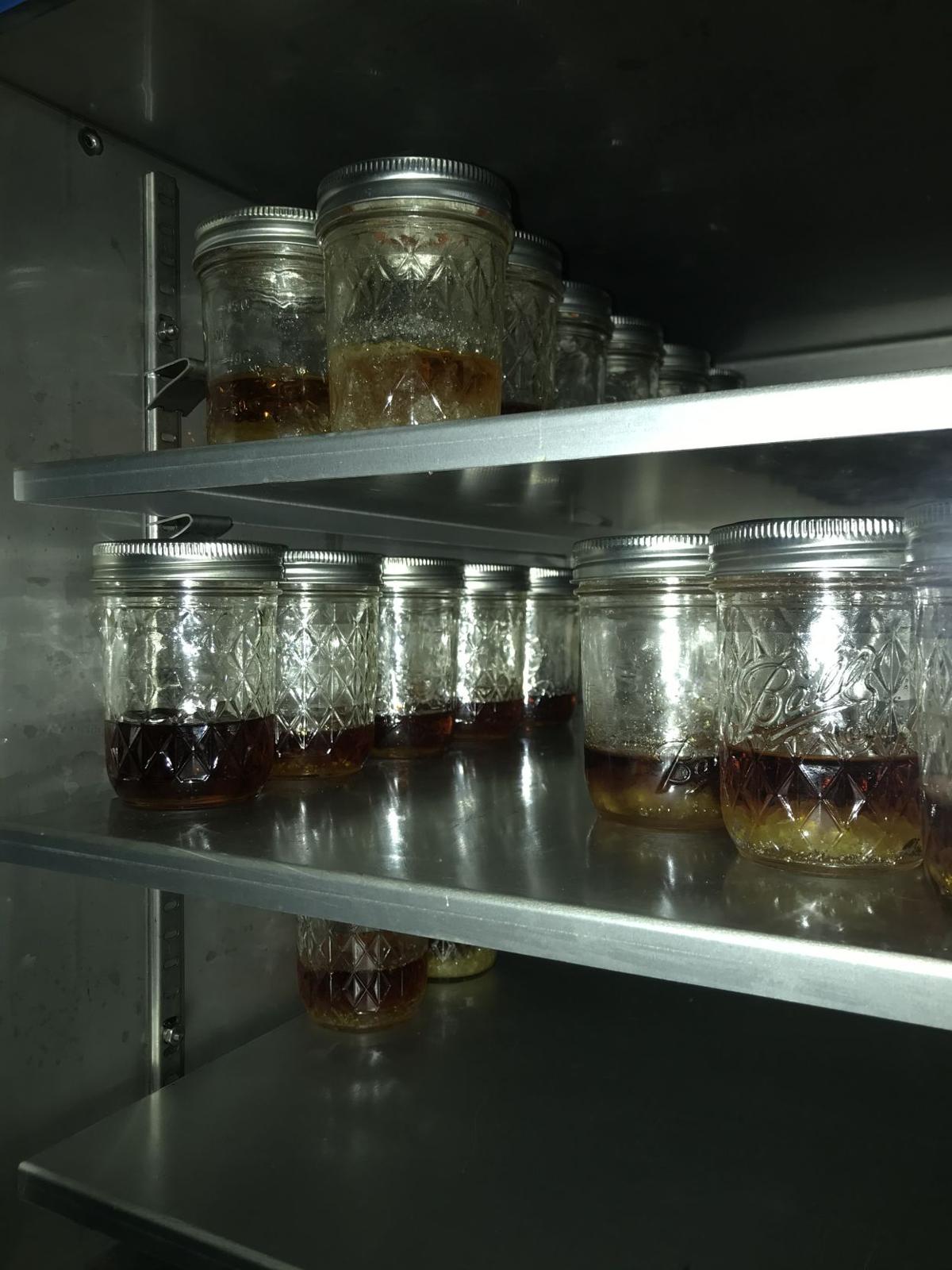 Jars of plant extract sit in a low temperature oven to let the butane rise and leave the product. THC crystals sit at the bottom of the jar and the BHO sauce at the top will later be placed into concentrate cartridges. Photo courtesy of AKO Farms LLC. 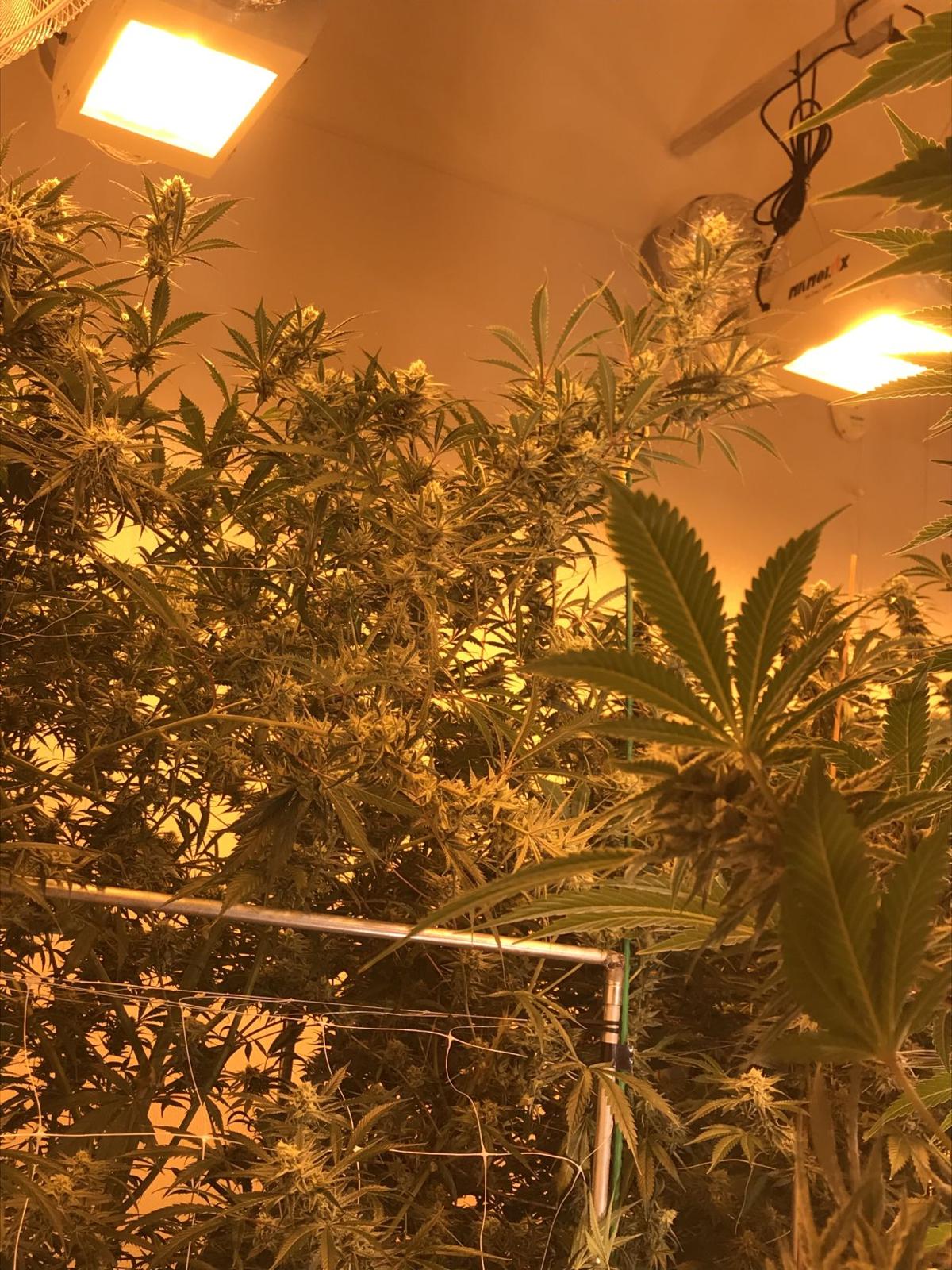 Plants in the AKO Farms grow rooms are fed through a combination of column lights and ceiling lights. Photo courtesy of AKO Farms LLC.

Tall plants grow through plastic mesh stretched across the room to provide structural support for plants as they grow. Photo courtesy of AKO Farms LLC.

Jars of plant extract sit in a low temperature oven to let the butane rise and leave the product. THC crystals sit at the bottom of the jar and the BHO sauce at the top will later be placed into concentrate cartridges. Photo courtesy of AKO Farms LLC.

Plants in the AKO Farms grow rooms are fed through a combination of column lights and ceiling lights. Photo courtesy of AKO Farms LLC.

Liza Martin, her husband Marty and their business partner Justin Brown have high hopes for cultivating a one-stop-shop cannabis experience for Sitka residents and tourists alike.

The trio began their collective adventure into the world of legal cannabis in 2018 when the group received their cultivation license for AKO Farms from the state marijuana regulation board.

For years before shifting focus to cannabis, Martin was a liquor distributor which she says is often like the cannabis business.

Martin also spent time owning an art gallery before that and spent 15 years as a surgery technician.

“I was so excited about this new business venture that I gave up my medical license to go all in,” she said.

The business quickly gained a following with AKO shipping their product to more than 30 stores in the Anchorage area.

“We are usually transporting more than $100,000 worth of product up to different stores in the area,” Martin said.

The business is especially known for a few select strains Martin says have quite a loyal following.

“What first got us on the map was our Strawberry Banana strain,” she said.

Strawberry Banana is a hybrid between a sativa and indica –– slightly more on the indica side with the mellowing elements that often accompany that variety.

The biggest marker for the strain though is the THC percentage –– a whopping 32%.

Tetrahydrocannabinol (THC) is one of at least 113 cannabinoids identified in cannabis and the principal psychoactive element playing the largest part in the high consumers feel upon consumption.

Martin estimates the strain to be the first 32% in the state.

“That really opened up the doors for us,” she said.

AKO is also known for a strain called Sour Al.

“That’s our working man’s weed,” Martin said with a laugh. “Or that’s what we like to call it. It’s a sativa so you can still be productive during the day with it.”

The strain is a cross between Sour Diesel and Albert Walker OG, creating an aroma profile mixing sour and fuel.

Another popular strain is an indica called Yerbert which is a mix of Sunset Sherbert and Y-Life, Martin explains. As an indica, the strain usually provides a highly relaxing body high.

What began as simply a cultivation business soon expanded to a concentrate business.

The business specializes in concentrates, sugar wax and cannabis concentrate crystals through the use of the butane extraction or BHO (butane hash oil) process –– one of a few processes that are often used to create concentrates.

The other two methods are Co2 extraction and alcohol extraction, each using the central ingredients in the name to extract THC from plant matter. The butane process uses often more expensive equipment but often yields the highest quality product.

For this method, cannabis is loaded into a tube and rinsed with liquid solvent — butane in this case.

The butane rinse of the cannabis plant material draws out the THC crystals and other beneficial materials from the plant, thus creating a concentrate of those compounds. The concentrate is then purged — a process that removes any butane from the concentrate — typically using heat and pressure. What you are left with is shatter, crystals, wax, etc depending on the heat and pressure used in the process.

“We don’t add anything else to it, it’s just purely the plant matter,” Martin noted.

That means the concentrate oil produced is referred to as “uncut oil.” Often, some concentrate businesses will cut oils with coconut oil or sometimes vegetable glycerin to expand the quantity.

AKO’s cultivation and concentrate licenses were both granted in 2018.

Business has not always been a walk in the park and it’s taken some time to get the businesses going, but the hard work is finally paying off, Martin noted in late January soon after the business received its retail license.

“We’re finally seeing light at the tunnel,” she said.

Being a long-time businesses owner, Martin is always coming up with new ideas and says one day she would like to be able to provide the Sitka area with an all encompassing one-stop cannabis experience complete with an eventual on-site consumption license she hopes.

“It would almost be like a winery,” Martin said. “Folks could come by and take a tour of our cultivation center, see our concentrate process, buy samples and try them out on the premises.”

For now though, Martin said she and her business partners plan to focus on opening their new retail storefront AKO Farms Direct — which was scheduled to open mid-February.

More information about AKO Farms and their speciality strains can be found by visiting their Facebook page — AKO Farms LLC –– or their website: www.akocarms.com.