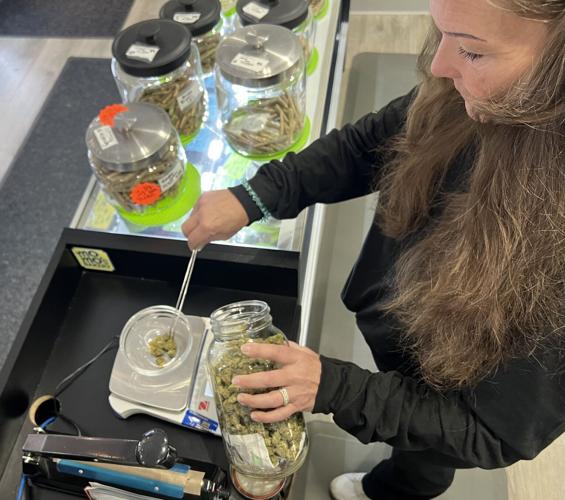 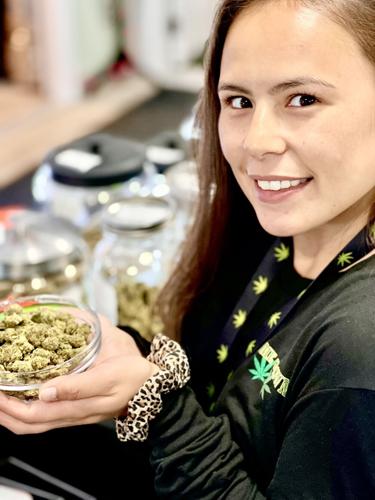 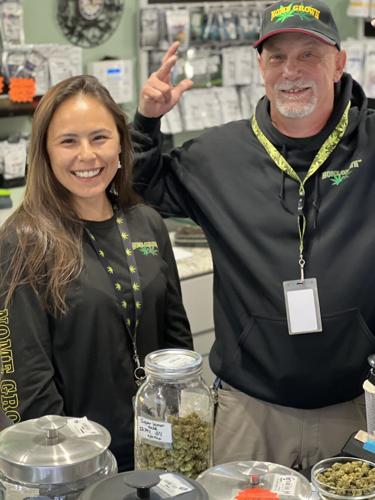 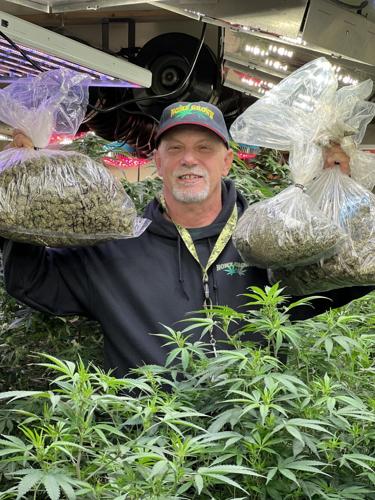 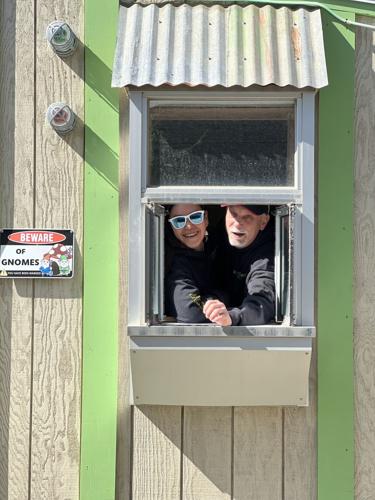 Nome Grown owners Greg Smith and Dora Ahwinona stand in the new drive through window of their business. 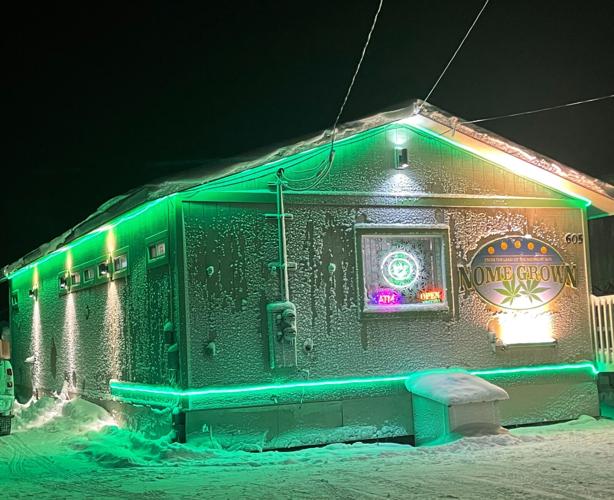 The exterior of Nome Grown glows green and frosty in the arctic night. 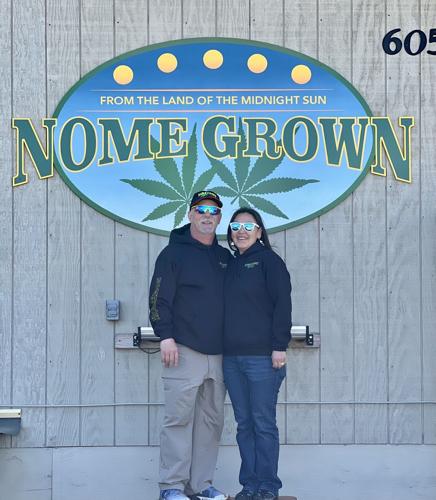 Nome Grown co-owners Greg Smith and Dora Ahwinona pose for a photo outside their store.

As just the second cannabis business in Nome, Nome Grown LLC was somewhat of an experiment when the store opened in March of 2017. The experiment proved successful, as the business has steadily grown over the past five years and continues to gain popularity and customers, said Greg Smith, who owns the business with his wife, Dora Ahwinona. With a customer-focused approach, Smith seeks to help Nomeites consume responsibly.

Nome Grown co-owners Greg Smith and Dora Ahwinona pose for a photo outside their store.

Smith explained that he treats the cannabis business “like any other business, because that is what it is.” The goal of Nome Grown, as of any business, is to “bring the best product” to his customer base. Nome Grown offers a variety of products from Alaskan vendors, as well as its own strains. True to its name, Nome Grown also grows some of its own products: The business has the only licensed cannabis cultivation facility in the entire area of Western Alaska.

Nome Grown has two cultivators, both of whom grow all natural organic products hydroponically. Smith said a particularly popular strain is Tundra Haze, which is only sold at Nome Grown. Other favorites include Green Monkey and Blueberry Haze.

Nome Grown’s success is likely in part because the business’s focus is on the customer experience and providing a full range of products to meet customers’ desires, according to Smith. In addition to its own product, Nome Grown also sources cannabis products from across the state. Products from Lady Gray Medibles in Soldotna, Kreative Konfections in Wasilla, Greatland Ganja in Kasilof, Einstein Labs in Anchorage and Cosmic Seaweed in Homer can all be found at Nome Grown.

Smith mentioned that there is a large population of older Nome residents who are frequent customers. Many use the products to help with pain, he added.

To that end, a recent addition to Nome Grown’s shelves is 1:1 products. This means the product has an equivalent ratio of THC to CBD, which helps with pain management while preventing users from becoming “wildly high,” according to Smith. The 1:1 products have proven popular, and the pre-roll deli bar “just takes the house,” Smith said.

Smith sees Nome Grown’s role in the community as providing an alternative to alcohol for residents to consume responsibly. This is especially important in a region plagued by serious alcohol and hard drug problems.

“No one has ever died from an overdose of marijuana,” Smith said. As an added benefit, Nome Grown “created six well-paying jobs,” for residents.

Nome Grown owners Greg Smith and Dora Ahwinona stand in the new drive through window of their business.

Addiction is a phenomenon of which Smith has a deep knowledge. He is a trained clinical social worker, and his career focused on drug and alcohol counseling. So how did a clinician turn into a cannabis business owner? It unfortunately took a serious injury and, therefore, personal experience with pain.

Smith explained that the plans for Nome Grown began to form when he suffered a neck injury, which resulted in three months of bed rest. Based on his professional training and knowledge of commonly prescribed pain killers, “I wanted to avoid opioid pills.”

To cope with the pain, Smith instead turned to marijuana, working with his doctors throughout the process.

“It worked well,” he said, adding that, prior to this, it had been years since he had consumed cannabis products.

While he was essentially bed ridden, Smith began drafting licenses for both cannabis distribution and growing. These efforts ultimately resulted in the creation of Nome Grown, which opened during Iditarod 2017.

“I’ve really, really enjoyed it,” Smith said of his new career path, which he has been “pleasantly surprised” by. The business has also been blooming, with a solid customer base and steady growth throughout the years.

“The people are great,” Smith said.

Although Nome Grown has experienced several notable successes, this is not to say it has been all smooth sailing. There are several challenges of operating a cannabis business in rural Alaska, particularly in an area with no road access, Smith said. Many of these hurdles mean that Nome Grown incurs additional costs that businesses operating on the road system do not experience.

This was particularly difficult during the Covid-19 pandemic, when Nome implemented travel restrictions and a mandatory quarantine period. The bright side, though, is “we make first class smell really good,” he laughed.

Smith has several plans for expanding Nome Grown to keep up with the growing customer base. For one, Smith is spearheading an effort to create the first drive-through window. This means that customers will be able to order cannabis products in much the same way as people can order drive through coffee.

Along with adding a drive through, Smith said he is considering expanding into concentrates and edibles. However, he explained that he is learning that this could be challenging due to the extremely high cost of bringing large amounts of product to Nome.

Despite the many challenges of operating a business in rural Alaska, Smith plans to keep Nome Grown’s momentum growing.