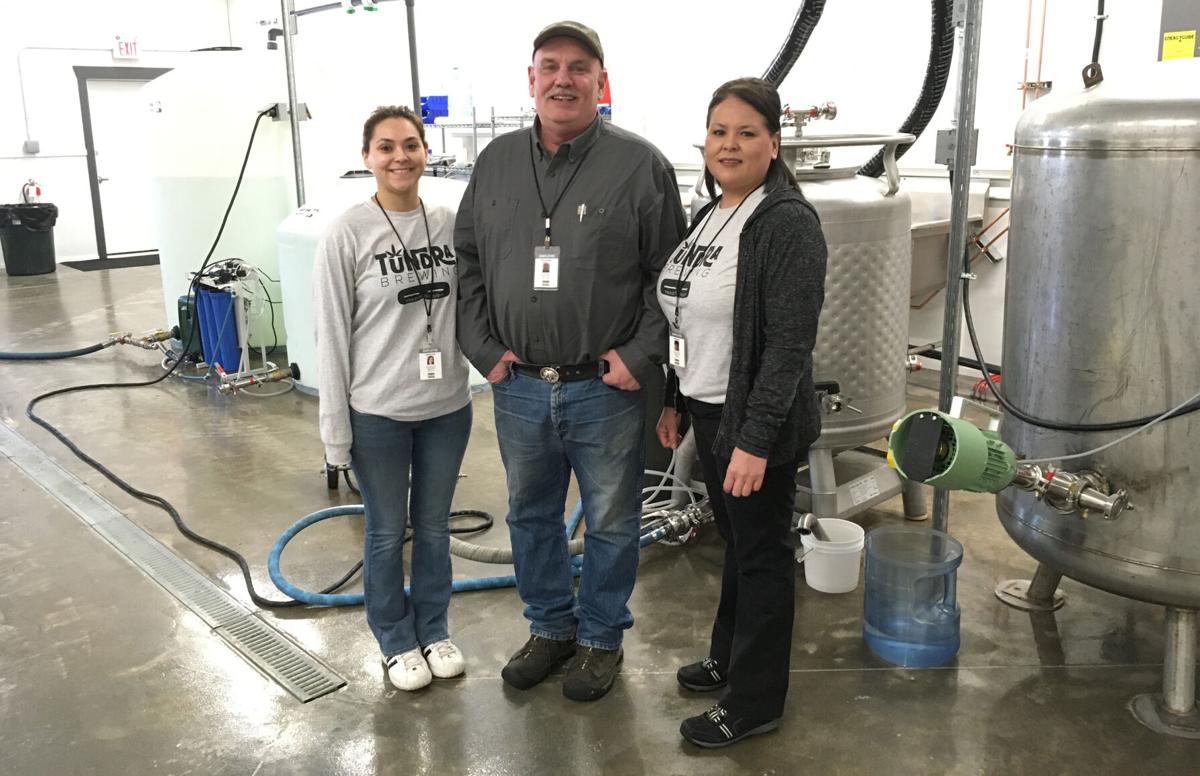 From left, Danielle Scott, Brian Simpson and Nellie Scott are the family behind Tundra Brewing. 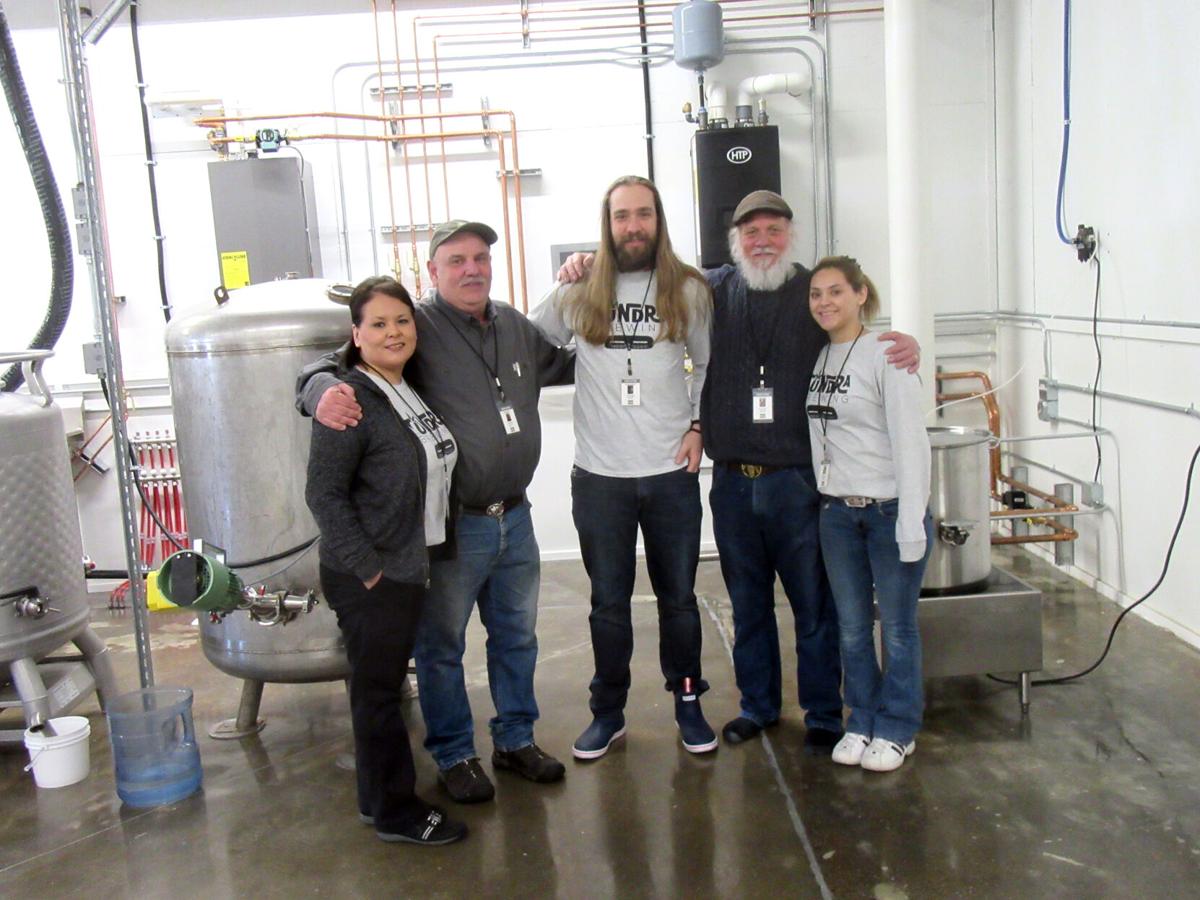 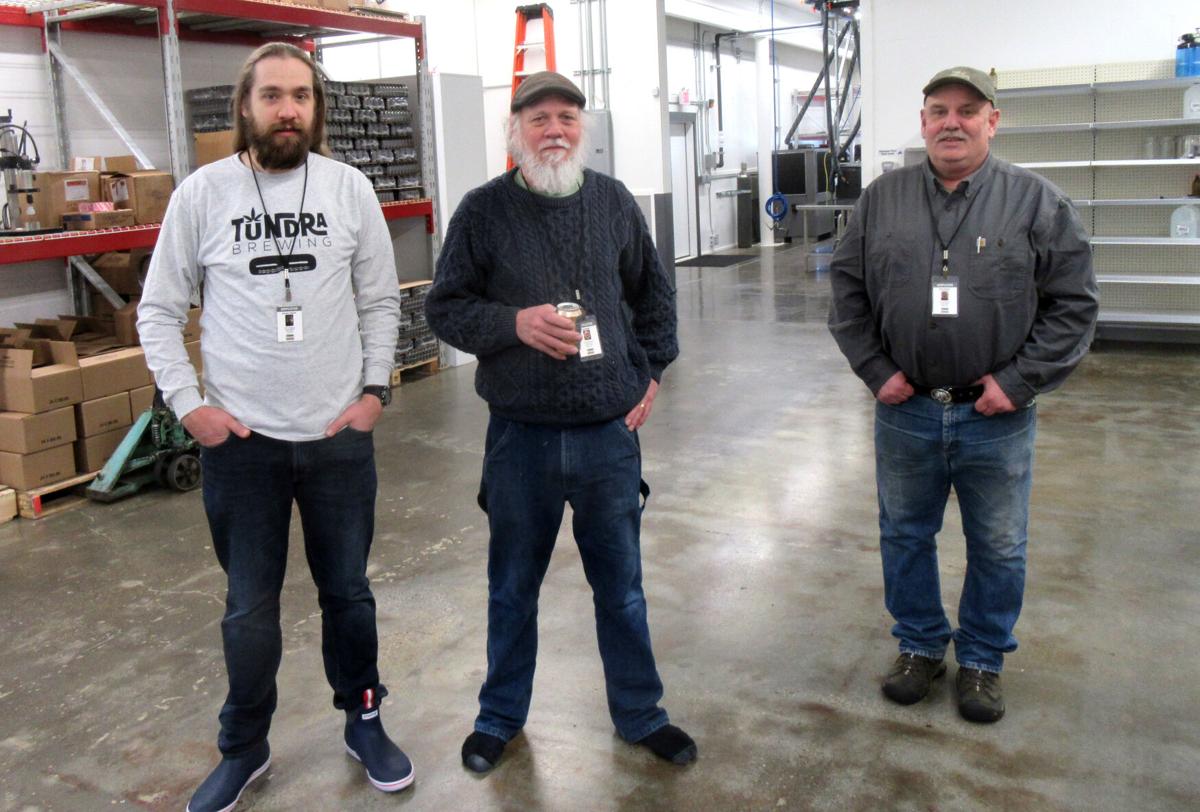 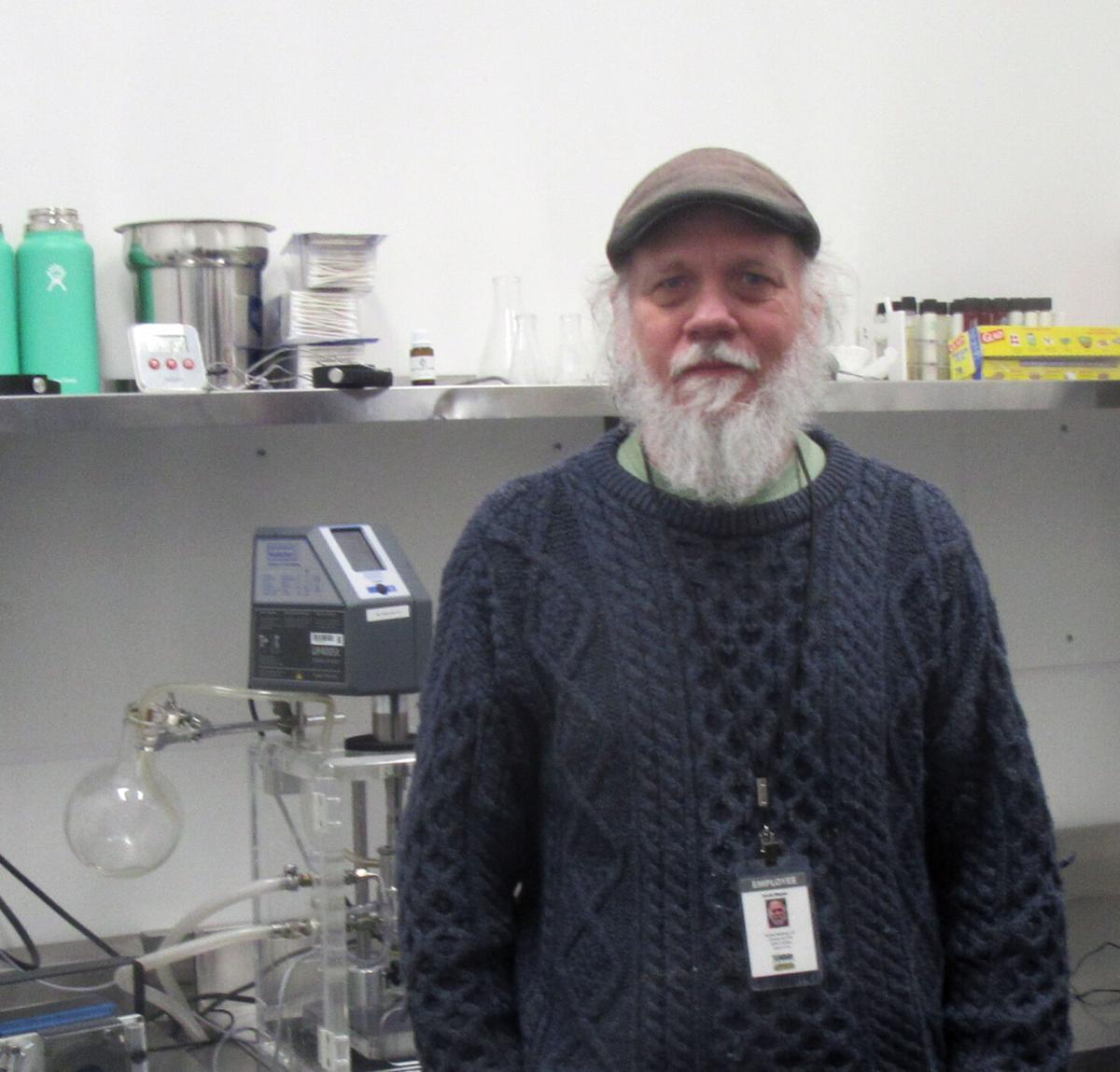 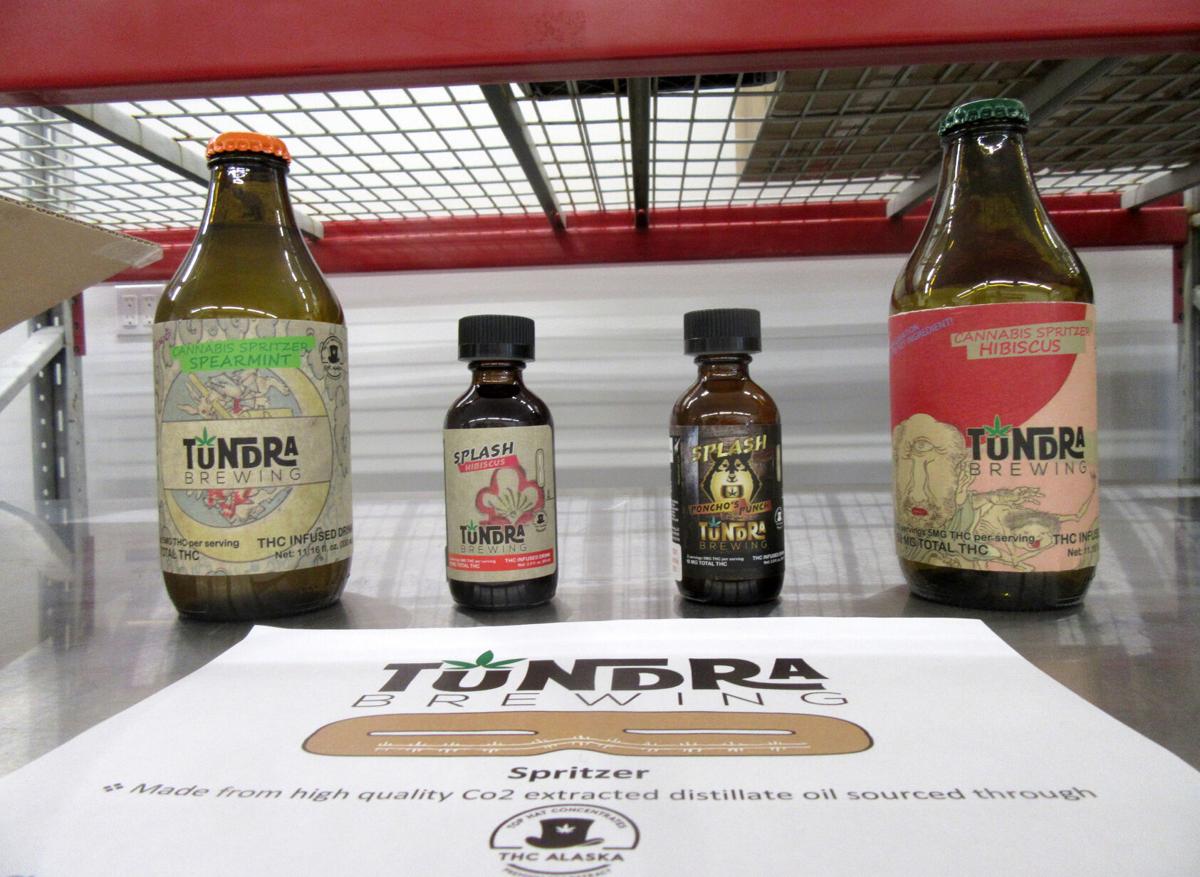 From left, Danielle Scott, Brian Simpson and Nellie Scott are the family behind Tundra Brewing.

When Alaska voters approved a legalized cannabis market, Fairbanks entrepreneur Brian Simpson knew right away he wanted to find his way into the new market. The question was what angle he’d take.

Looking at overall cultural trends, Simpson said he recognized that the increasing attention people are paying to their personal health runs counter to the traditional method of consuming marijuana.

“Society’s going away from smoking,” he explained. This prompted him to look at an emerging sub-market within the new industry: edibles.

Of course, Alaska has seen a number of bakeries quickly spring up and start vying for shelf space at dispensaries with cookies, candies, and more. But what Simpson wasn’t seeing a lot of on offer was infused beverages, which, he said, “we ultimately thought is going to be the No. 1 edible in time.”

Filling that niche is what Simpson and his wife, Nellie Scott, hope to do with their newly launched business, Tundra Brewing. The company rolled out its first products at the very end of 2020, and is already getting positive feedback from customers.

Simpson’s current products, carbonated beverages that carry a potent 50 milligrams of THC, and smaller bottles of flavored liquid intended to be mixed with other drinks that contain 10 milligrams, are available throughout the state. Bringing them to market was a three-and-a-half year endeavor that began with his initial business plan for edibles, then moved through the licensing process even as he shifted his focus to beverages.

What remained constant throughout the process, though, was a focus on aligning his product with the clean label movement, a growing tendency among consumers to want to know exactly what they are putting in their bodies, be it prepackaged foods at grocery stores, menu items at restaurants, or edibles at dispensaries. “We just feel that’s probably the way things will go,” Simpson said, “and we wanted to do something natural.”

This was where Scott Meyer entered the story. Meyer and Simpson both attended the same high school in San Diego, but they only met through a mutual classmate and friend, Juneau resident Brad Cure. Meyer has a long history in the beverage world, having opened a winery in Northern California in the 1980s, followed by a brewery. After relocating to North Carolina he opened another brewery on the Outer Banks, along with a natural beverage business.

“I’ve always been exploring the cutting edge of beverages, and I think this is where it is right now,” Meyer said, discussing cannabis-infused drinks in general, and Tundra Brewing in particular. “This is really starting to take off.”

After a series of meetings, phone calls, and discussions about their visions for where this startup could go, Meyer and Simpson pooled their respective strengths into creating drinks that are all natural, taste good, and offer consumers choices in both flavors and potency.

“Scott has the knowhow to make beverages and work in the lab,” Simpson said, explaining why he chose to join forces with him.

“I can’t resist a challenge,” was Meyer’s explanation for why he moved from North Carolina to Alaska to assist in the venture.

One early and crucial step was choosing where to source their extracts. Simpson chose Top Hat Cannabis in Juneau because their cannabis is grown to organic standards (owing to its current federal status, cannabis cannot be officially certified as organic, but Top Hat uses all natural growing techniques and renewable energy sources).

“They’re very picky about the quality,” Simpson said. “And that’s what we’re concentrating on, the quality.”

Then the duo needed to find flavorings that, Meyer explained, complement the cannabis rather than simply covering up the taste.

“Instead of hiding it, we’re amplifying it and working with it,” Meyer explained. For their initial run, they used essential oils of lemon verbena, spearmint, cinnamon, hibiscus, and more.

Because oil and water don’t mix, the next challenge was to find a way of breaking down the cannabis oil so it wouldn’t separate in the bottle. After all, one can’t shake a bottle of carbonated liquid to mix the ingredients and then open it without losing half the product.

What Meyer did was use a process of nano-emulsification called sonication, which breaks the oils down using sound waves. This creates tiny particles that remain suspended in the drinks rather than settling out, leading to a long shelf life. It also had an unexpected surprise.

“An added benefit to (sonication),” Meyer said, is “the particles of oil are dropped down to such a small size that they stay in suspension and you’ve got a good emulsion, you also get higher bioavailability of THC, and the onset is faster.”

Where edibles are known to take an hour or more before their effects are felt, consumers of Tundra Brewing beverages report feeling the first twinges as quickly as 15 minutes after drinking them, with waves of effects following, peaking about an hour after consumption.

This dovetails nicely with a longterm vision for the company. Simpson feels onsite consumption locations will begin to proliferate, and his beverages are perfect for those who don’t want to smoke.

Since the drinks Tundra Brewing is producing have similar onset times to alcohol, this could create new social spaces for cannabis consumers who want smoke-free environments. He sees a Starbucks or microbrewery approach for these businesses. But first the beverages need to be made.

“So why not make it possible,” he asked.

A nearer-term plan is to bring in local ingredients. Getting the drinks to market during the middle of winter meant using outside flavorings for their rollout products. But as summer arrives and the state greens up, Tundra Brewing plans on incorporating Alaska botanicals. They are presently experimenting with spruce tips, blueberries, fireweed, birch water, and more.

“It makes a spinoff industry,” Simpson said. “If we can generate an industry where people can tap birch and collect wild produce, that’s part of the concept too. To be an economical benefit that’s renewable, from our lands.”

That Alaska focus is also found in the company’s logo. Since Simpson’s wife and business partner Scott is Inupiaq, they used a drawing of the famous Inuit snow goggles to represent the company.

“We’re actually learning as we go,” Simpson said of his young company. One of the things they’ve learned is that through adding terpenes, they can target their consumers’ desired effect. “To make up for that on flavor, we’re really concentrating on terpenes.”

And those terpenes help the company replicate strains. “We can, through our process, add the terpenes later to get the effect of a sativa or an indigo,” said Brandon Swibold, Tundra Brewing’s I.T. employee and assistant, who has become fascinated by the science behind what they are doing.

The enthusiasm that Swibold has will hopefully spread to Alaska’s many cannabis consumers, as well as first-time shoppers.

“We’re trying to make the market bigger,” Simpson said. “Not just appeal to people that really don’t want to smoke. I think there are a lot of people who are shy to walk into a marijuana retail store and maybe not find something that’s compatible for them, and we’re trying to help that. I really believe that’s an underserved part of the population.”

David James is a freelance writer in Fairbanks. Comments about the story? Email jstricker@AlaskaCannabist.com.